Rape Can Be Funny Lyrics

Rape Can Be Funny Lyrics


Ohhh, some people don't like you to talk like that.
Ohh, some people like to shut you up for saying those
things.
You know that. Lots of people. Lots of groups in this
country want to tell you how to talk.
Tell you what you can't talk about. Well, sometimes
they'll say, well you can talk about something but you
can't joke about it.
Say you can't joke about something because it's not
funny. Comedians run into that shit all the time.
Like rape. They'll say, "you can't joke about rape.
Rape's not funny."
I say, "f*ck you, I think it's hilarious. How do you
like that?"
I can prove to you that rape is funny. Picture Porky
Pig raping Elmer Fudd.
See, hey why do you think they call him "Porky," eh? I
know what you're going to say.
"Elmer was asking for it. Elmer was coming on to Porky.
Porky couldn't help himself, he got a hard- on, he got
horney, he lost control, he went out of his mind."
A lot of men talk like that. A lot of men think that
way. They think it's the woman's fault.
They like to blame the rape on the woman. Say, "she had
it coming, she was wearing a short skirt."
These guys think women ought to go to prison for being
cock teasers. Don't seem fair to me.
Don't seem right, but you can joke about it. I believe
you can joke about anything.
It all depends on how you construct the joke. What the
exaggeration is. What the exaggeration is.
Because every joke needs one exaggeration. Every joke
needs one thing to be way out of proportion.
Give you an example. Did you ever see a news story like
this in the paper?
Every now and then you run into a story, says, "some
guy broke into a house, stole a lot of things, and
while he was in there, he raped an 81 year old woman."
And I'm thinking to myself, "WHY??? What the f*ck kind
of a social life does this guy have?"
I want to say, "why did you do that?" "Well she was
coming on to me. We were dancing and I got horney.
Hey, she was asking for it, she had on a tight bathrobe." I'll say, "Jesus Christ, be a little f*cking
selective next time will you?"

Now, the biggest problem an Eskimo rapist has, trying
to get wet leather leggings off a woman who is kicking.
Did you ever try to get leather pants off of someone
who doesn't want to take them off?
You would lose your hard-on in the process.
Up at the north pole you dick would shrivel up like a
stack of dimes.
That's another thing I wonder.
I wonder, does a rapist have a hard-on when he leaves
the house in the morning,
or does he develop it during the day while he's walking
around looking for somebody.
These are the kind of thoughts that kept me out of the
really good schools. 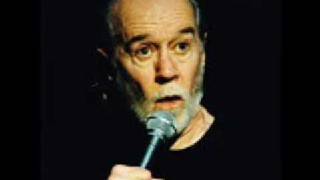