Here's another idea. I'm going to save you a whole lot
of money on prisons, but at the same time we are still
going to remove from society many of our more annoying
citizens. Four groups are going away permanently.

First group: Violent criminals. Here's what you do with
these Emmy award winners. You take the entire state of
Kansas. You move everybody out. You give them a couple
of hundred dollars for their inconvinience, you know.
Got to be fair. And then, you move them out, you put a
big ten story electric fence around Kansas and Kansas
becomes a permanent prison farm for violent criminals.
No parole, no police, no supplies, the only thing you
give them is lethal weapons and live ammunition, so
they can communicate in a meaningful way. Then you put
the whole thing on Cable TV. The Violence Network, VNN.
And for a corporate sponsor, you get one of those
companies that loves to smear it's logo feces all over
the landscape. Budweiser will jump at this shit in half
a minute.

Alright, next group: sex criminals. Completely
incurable, you got to lock them up. You could outlaw
religion and in most cities sex crimes would disappear
in a couple of generations. But we don't have time for
rational solutions! Much easier to fence off another
rectangular state. Rectangular states are cheaper to
fence, saves the taxpayers money, you know? This time
Wyoming. But only for true sex offenders. We're not
going to bother consenting adults who liike to dress up
in leather boy scout uniforms and smash each other in
the head with ballpeen(?) hammers while they take turns
blowing their cat. There's certainly nothing wrong with
that. It's a victimless hobby. And think of how good
the cat must feel! No, we're only going to lock up
rapists and molesters. Those hopless romantics. Who're
so full of love they can't help getting a little of it
on you. Usually on your leg. You take all of these
heavy breathing fun seekers, and you stick them in
Wyoming. And you let them suck, f*ck, and fondle, you
let them blow, chew, sniff lick whip gobble and
cornhole each other, until their testicles are
whistling 'Oh Come All Ye Faithful'! And, and you turn
on the cameras and you've got The Sperm Channel! And
don't forget our corporate sponsor, we're going to let
Budweiser put little logo patches on the rapist's pant
right here, 'This Bud's for you'!

Alright, next group: Drug addicts and alcoholics. Not
all of them, don't get nervous. Just the ones who are
making life difficult for at least one other person.
And we're not going to bother first offenders. People
deserve a chance to clean up. Everyone will get...
twelve chances to clean up. Alright, fifteen! Fifteen!
that's fine, and that's it, if you can't make it in
fifteen tries, off you go *fwit* to Colorado! Colorado!
The perfect- a perfect place for staying loaded. Each
week, all of the illegal drugs confiscated in the
United States - that the police and D.E.A. don't keep
for their own personal use - will be air-dropped into Colorado. And we're going to turn the Coors brewery
over to the beer-drinking assholes, and everyone can
stay wasted wired stoned bombed hammered smashed and
shitfaced round the clock on another new cable channel,
Shitface Central 'This is the real Rocky Mountain
HIIIIIIIIIIIIIIIGH!!!

Ok I've saved my favorite group for last. The maniacs
and crazy people. Yeah. The ones who live out where the
buses don't run. And I distinguish between maniacs and
crazy people. A maniac will beat nine people to death
with a steel dildo. A crazy person will beat nine
people to death with a steel dildo, but he'll be
wearing a Bugs Bunny suit at the time. So you can't put
them all away. You know you got to keep some of them
around just for the entertainment. Like a guy who tells
you the King of Sweden is using his penis as a radio
transmitter to send anti-semitic lesbian meatloaf
recipies to Soupy Sales and Marvin Hamlisch. A guy like
that you want to give him his own radio show. No, the
maniac farm will be reserved strictly for hopeless
cases. Like a guy who gets a big tatoo on his chest of
Liza Minnelli taking a shit, you know? And he tells you
if he wiggles a certain way it looks like she's wiping
her ass, you know? A guy like that, you want to get him
into custody as quickly as possible. Now, for the
maniac farm, I think there's no question we got to go
with Utah. Utah. Easy to fence. Easy to fence. Right
next to Wyoming and Colorado and Colorado is right next
to Kansas, and that means all four groups of our most
amusing citizens are now in one place.

Except for the big fences. And I think I have another
one of my really good ideas for Cable TV. Gates. Small
sliding gates in the fences. Think of what you've got
here. Think of what you've got. Predators, degenerates,
crackheads and fruitcakes. Nine hundred miles of fence
seperating them. Every fifty miles you put a small
sliding gate. But, the gates are only ten inches wide
and they're only open once a month... for seven
seconds. And you know something? f*ck Cable, this shit
has got to be on Pay-Per-View. Because, if those gates
are only open seven seconds a month, you are going to
have some mighty interesting people pushing and shoving
to be first in line. Deeply disturbed armed cranky
lunatics on drugs. You know the ones. Lot of tatoos...
lot of teeth broken off at the gumline... the true face
of America. And every time you open the gates, some of
the more aggressive ones are going to get through. The
creme de la creme. The alphas. They're going to get
through, they're going to find each other and they're
going to cross-breed. And pretty soon you'll have a
melting pot. Child killers corpse f*ckers drug zombies
and full-blown wack-a-loons. Wandering the landscape in
search of truth and fun. Just like now! Everyone will
have guns, everyone will have drugs, and no one will be
in charge. Just like now! But at least we'll have a
balanced budget. 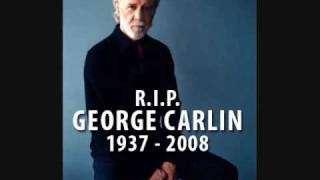