On The Road Lyrics

On The Road Lyrics


Did you notice there aren't many Chinese guys named
Rusty? Guess the name never caught on over there.
But you got here, did you all come in the same van by
any chance? You know, there's a feeling of unity,
y'know.
"Good news, Nice man, Yeah"
Somebody else, "Yeah"

Oh-oh. [Whistling]
Come on let me hear it! [Audience whistling]
No problem!
Shit, I used to work in a pet shop! I'm used to that,
right in the morning when they want their seed.

But you're still the audience. You all came from
different places.
That's what I like. Everybody comes from a different
house. Different apartment, different room... You left
your rooms.
"I'm leaving my room," must be special.
And you come all the way here to act as a unit. It's
great! You ought to have a reunion next year, you know?
Get together, talk about the show.
Well, I think of that shit, audience responsibility
man.
When I'm driving to the theater, gonna see a show,
saying to myself,
"What kind of a member of the audience will I be
tonight?" "
"Will I be a credit to my row?"
"Will we win Row of the Year?"
"Suppose we get some shit from another section!"

Balcony always feels they have a little more soul than
the folks in the orchestra, hmm?
You take that shit from them?! They said [Bronx Cheer]
They're coming down, there coming down.
See, now we been here 10 minutes and already you're choosing up sides, man.
There's always a few people left over from the Black
Sabbath concert, man.
Just.. if ya just elect a spokesman, I'll be glad to
answer, man.
But oddly enough these places are built for the voices
to go that way. And all I can hear is,
"ESREVER NI GNIKLAT," Shit, I gotta turn around,
"Asshole, get off!!"
I broke a nail on that too. Sure you're ok.

Heinekins, right. Bottled in holland, brewed and
bottled in Holland. And somebody brought it all the way
here. Did you ever think about that shit? This was made
in Holland. Must have come to New York first, probably.
Some sonofabitch drove this all the way here. Cross
country trip for a bottle of beer!

When you're at someone else's house, do you look in
their draws? When they leave you alone,
"*mumbling*... Jesus, look at that, man."
I do, I don't want to steal it, just want to know where
it is, you know. That's all. In case they need a hand.
But, you ever look in the desk drawer? Anybody's desk
drawer? Any desk in the world. You open that top, flat,
middle drawer. Not the three on the side, or the two
that look like three. Doesn't that piss you off? The
desk is lying!! But that top middle drawer, did you
ever notice there's always four cents in the tray? I'd
take it, f*ck 'em, you know.
You leave it around, I'll pick it up. 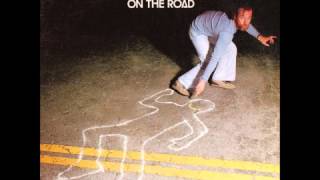 check amazon for On The Road mp3 download
these lyrics are submitted by kaan
browse other artists under G:G2G3G4G5
Record Label(s): 2007 Laugh com
Official lyrics by