But you know, the longer you listen to this abortion
debate, the more you hear this phrase "sanctity of
life". You've heard that. Sanctity of life. You believe
in it? Personally, I think it's a bunch of shit. Well,
I mean, life is sacred? Who said so? God? Hey, if you
read history, you realise that God is one of the
leading causes of death. Has been for thousands of
years. Hindus, Muslims, Jews, Christians all taking
turns killing each other 'cuz God told them it was a
good idea. The sword of God, the blood of the land,
veangence is mine. Millions of dead motherf*ckers.
Millions of dead motherf*ckers all because they gave
the wrong answer to the God question. "You believe in
God?" "No." *Pdoom*. Dead. "You believe in God?" "Yes."
"You believe in my God? "No." *Poom*. Dead. "My God has
a bigger dick than your God!" Thousands of years.
Thousands of years, and all the best wars, too. The
bloodiest, most brutal wars fought, all based on
religious hatred. Which is fine with me. Hey, any time
a bunch of holy people want to kill each other I'm a
happy guy.

But don't be giving me all this shit about the sanctity
of life. I mean, even if there were such a thing, I
don't think it's something you can blame on God. No,
you know where the sanctity of life came from? We made
it up. You know why? 'Cuz we're alive. Self-interest.
Living people have a strong interest in promoting the
idea that somehow life is sacred. You don't see Abbott
and Costello running around, talking about this shit,
do you? We're not hearing a whole lot from Musolini on
the subject. What's the latest from JFK? Not a goddamn thing. 'Cuz JFK, Musolini and Abbott and Costello are
f*cking dead. They're f*cking dead. And dead people
give less than a shit about the sanctity of life. Only
living people care about it so the whole thing grows
out of a completely biased point of view. It's a self
serving, man-made bullshit story.

It's one of these things we tell ourselves so we'll
feel noble. Life is sacred. Makes you feel noble. Well
let me ask you this: if everything that ever lived is
dead, and everything alive is gonna die, where does the
sacred part come in? I'm having trouble with that.
'Cuz, I mean, even with all this stuff we preach about
the sanctity of life, we don't practice it. We don't
practice it. Look at what we'd kill: Mosquitos and
flies. 'Cuz they're pests. Lions and tigers. 'Cuz it's
fun! Chickens and pigs. 'Cuz we're hungry. Pheasants
and quails. 'Cuz it's fun. And we're hungry. And
people. We kill people... 'Cuz they're pests. And it's
fun!

And you might have noticed something else. The sanctity
of life doesn't seem to apply to cancer cells, does it?
You rarely see a bumper sticker that says "Save the
tumors.". Or "I brake for advanced melanoma.". No,
viruses, mold, mildew, maggots, fungus, weeds, E. Coli
bacteria, the crabs. Nothing sacred about those things.
So at best the sanctity of life is kind of a selective
thing. We get to choose which forms of life we feel are
sacred, and we get to kill the rest. Pretty neat deal,
huh? You know how we got it? We made the whole f*cking
thing up! Made it up! The same way... thank you. 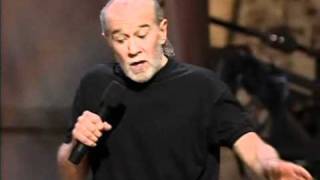 check amazon for Sanctity Of Life mp3 download
these lyrics are submitted by kaan
browse other artists under G:G2G3G4G5
Record Label(s): 2007 Laugh com
Official lyrics by