My father came from Japan in 1905
He was, 15 when he immigrated from Japan
He, he, he worked until he was able to buy this patch
And build a store

Let me, tell you the story in the form of a dream
I don't know why I have to tell it, but I know what it means
Close your eyes, just picture the scene
As I paint it for you, it was World War II
When this man named Kenji woke up
Ken was not a soldier
He was just a man, with a family, who owned a store in L.A.

That day, he crawled out of bed like he always did
Bacon and eggs with wife and kids
He lived on the second floor of a little store, he ran
He moved to L.A. from Japan
They called him 'Immigrant'
In Japanese, he'd say, he was called, Esay
That meant 'First generation in the United States'

When everyone was afraid of the Germans, afraid of the Japs
But most of all afraid of a homeland attack
And that morning when Ken went out on the doormat
His world went black 'cause
Right there, front page news, three weeks before 1942
"Pearl Harbour's been bombed and the Japs are comin'"

Pictures of soldiers dyin' and runnin'
Ken knew what it would lead to
Just like he guessed, the President said
"The evil Japanese in our home country will be locked away"
They gave Ken, a couple of days
To get his whole life packed in two bags
Just two bags, couldn't even pack his clothes

Some folks didn't even have a suitcase, to pack anything in
So two trash bags, was all they gave them
When the kids asked mum, "Where are we goin'?"
Nobody even knew, what to say to them
Ken didn't wanna lie, he said, "The US is lookin' for spies
So we have to live in a place called Mandinar
Where a lot of Japanese people are"

Stop it, don't look at the gunmen
You don't wanna get the soldiers wonderin'
If you gonna run or not,
'Cause if you run then you might get shot
Other than that, try not to think about it
Try not to worry 'bout it bein' so crowded
Someday, we'll get out, someday, someday As soon as war broke out
The G.I. came and they just come to the house
And you have to come all the Japanese have to go
They took Mr.Lee, people didn't understand
Why did they have to take him?
Because he's an innocent labor

So now, they're in a town with soldiers surroundin' them
Every day, every night, look down at them
From watch towers up on the wall
Ken couldn't really hate them at all
They were just doin' their job and
He wasn't gonna make any problems

He had a little garden, with vegetables and fruits that
He gave to the troops in a basket his wife made
But in the back of his mind, he wanted his families life saved
Prisoners of war in their own damn country, what for?
Time passed in the prison town

He wanted them to live it down when they were free
The only way out was, joinin' the army
And supposedly, some men went out for the army, signed on
And ended up flyin' to Japan with a bomb
That 15 kilotonne blast, put an end to the war pretty fast
Two cities were blown to bits, the end of the war came quick

Ken got out, big hopes of a normal life, with his kids and his wife
But, when they got back to their home
What they saw made them feel so alone
These people had trashed every room
Smashed in the windows and bashed in the doors
Written on the walls and the floor 'Japs not welcome anymore'

And Kenji dropped both of his bags at his sides and just stood outside
He, looked at his wife without words to say
She looked back at him, wiped the tears away
And, said, "Someday, we'll be okay, someday"
Now, the names have been changed, but the story's true
My family was locked up back in '42
My family was there it was dark and damp
And they called it, an internment camp

When we first got back from camp, uhh
It was pretty, pretty bad, I, I remember my husband said
"Are we gonna stay 'til last?"
Then my husband died before they close the camp 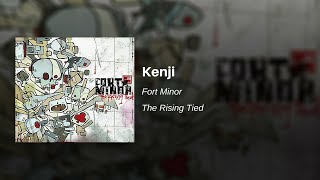 check amazon for Kenji mp3 download
these lyrics are last corrected by brittani
browse other artists under F:F2F3F4F5
Songwriter(s): Mike Shinoda
Record Label(s): 2005 Warner Bros Records Inc for the U S and WEA International Inc for the world outside the U S
Official lyrics by

Rate Kenji by Fort Minor (current rating: 10)
12345678910
Meaning to "Kenji" song lyrics (2 meanings)
jj dog March 26, 2011-14:55
0
i love all fort songs but this one hits me in the heart and i want to hate on the USA for what they did but the past is gone and i can't do nothing about it... bigg sad face..
Erick October 15, 2010-13:33
0
Wow that really makes you think. A friend told me about this song. I am doing research into writing a graphic novel about WWII, deals with some of those issues, what timing, glad I found out about it.
Watch Video Comment Enlarge font Correct lyrics Print lyrics