Get Me Gone Lyrics

Get Me Gone Lyrics

Before the first song that you heard me on
There were people already tryin' to get me gone
Tellin' me to quit rapping, just play the keys
That my band had a singer, they didn't need me
But my band had my back, so we did the tracks
Put out the album and the talk went flat
It was funny at first but then the humor faded
When some magazines printed that our label made us

We were to be good to be true
Some were saying ghost writers were writin' all that we do
So we had to disprove it, we spelled it out to the detail how we do it
When we're making this music, after that I made it a rule
I only do e-mail responses to print interviews Because these people love to put a twist to your words
To infer that you said something f*cking absurd

Oh, did I lose you at infer?
Not used to hearing a verse that uses over first grade vocabulary words?
People used to infer that we were manufactured
Now I've got the interviews on file
Which people said what, which number to dial
So now every enemy screaming insanity
All they're ever gonna be's another big fan of me
Bitch

Ha ha ha, you believe that? Like that's crazy
Sounds crazy right? You're like this point, at this point you figure
You hear that and you're like, "That guy is out of his mind"
But honestly at that point, besides the fact that he wanted me
To just play keyboard or whatever, he didn't want me to rap
He was like maybe Joe Hahn should, um, wear a lab coat
And a cowboy hat on st, like when we play
I swear to God he's crazy, it was crazy, cowboy hat, yeah
And later on he claimed that he wrote our
All our songs, so that was real nice 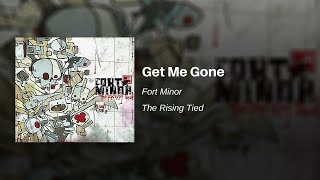 check amazon for Get Me Gone mp3 download
these lyrics are last corrected by The Boss
browse other artists under F:F2F3F4F5
Songwriter(s): Mike Shinoda
Record Label(s): 2005 Warner Bros Records Inc for the U S and WEA International Inc for the world outside the U S
Official lyrics by