What a beautiful world, so fragile and fertile
Pain filled the void when boy met girl
He's a puppet to nature, one year later
Now so deeply and sickly in love it makes him hate her
The average romanticized American relationship
Sinks, capsized when either side becomes a slave to it
Conditioned, dependent, afraid to be alone
He needs that feeling that he can't create all on his own
He despises the fact she has a life outside of him
It drives him crazy to think she's not insanely consumed with him
Give her the guilt-trip and maybe she'll quit living,
To stay behind his prison walls and lose all individualism
Well this is happiness, masochistic torture
Played by the decadent, craved of affection
The needle digs deep to push contentment through his bloodstream
And drown out hollow, the pothole of a junkie
If he could only hear her sing, he wouldn't want to break her wings
But emptiness has such a warm, subtle sting
She makes up for what he lacks, trapped,
He can't imagine life without someone like that

Chorus:
We've rediscovered the long-lost art of dying
Only to lonely resent angels for flying
Twisted, living off of each other's sickness like parasites
This is paradise

We've rediscovered the long-lost art of dying
Only to lonely resent angels for flying
Addicted, afraid to take control of my own life
This is paradise

Verse 2:
What a beautiful world, emotionally destroyed
her became plural when girl met boy
Between several breakups and plenty relapses
Routine bred-comfort led to serious attachment
Now every once in a while she forgets to breathe
Terrified of losing him, paradise is misery
Too much faith in the life-saving knight in shining armour Now her knight's noticing the scars she can't hide any longer
But they were her story way before he was
It was gross hope to think he could heal such deep cuts
At first it felt so right but after one too many fights,
He turned out that hallway light and all the wonder turned to spite
So they sleep in the same bed with guns to each others' heads
Dead to romance, boiling the blood that painted roses red
Suffering from post-honeymoon disease, bleached through
His whole existence, she'll die if he decides to leave
Addicted to the way she feels when they spend time together
Detouring the now in a childish attempt to find forever
Despite the fact they hold each other heart to heart
You can't be that close to somebody without being so far apart

Silence, the most obscure sound I've ever heard
Those lonely, giant spaces in between your every word
And maybe, I'm totally crazy for holding on but
Just cus I'm insane, don't mean that I'm wrong
Now that you're gone I can't sleep at night
I barely even function right, my memory's on overdrive
Too hungry and too cold to cry
Miss the companionship I once took for granted
The way you helped me manage, the partnership that vanished
But I don't expect you to stay chained by the ankle,
There's so much world to see so, fly free my angel
I'm dying without you, but it's teaching me to live
Heaven ain't something someone else can give
It's all inside of me 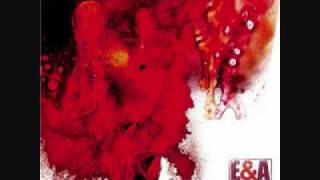