Days turn into years. "A" students turn into dropouts
Seeing the world from a creative angle turns into seeing it from a couch
Orgasms become lifetimes. Bong hits turn into white lines
A face becomes a dartboard and cardboard becomes a house
Boys turn into men. Enemies become your friends
Losing turns into winning and the beginning becomes the end
Words turn into magic. Rewind becomes a habit
Rabbits become vultures and cultures become trends
A party becomes a funeral. Sunlight turns into cancer
The rain turns beautiful. An unusual question becomes an answer
Happiness becomes a cataract. A sip turns into a six-pack
And Earth turns into Mars as my album becomes a standard A hero becomes a statistic. A lost soul enlisted
The potholes are lifted as the hot coals leave you blistered
A sickness becomes a teardrop. A cup of coffee becomes a long day
Your best friend's guidance becomes the wrong way
As the song plays my voice becomes the past, present, and future
Transportation becomes pollution as humans become computers
Time becomes space. Minds become waste
And a person becomes less interested when a mic becomes an instrument
An age turns into a nightmare. Love becomes hate
The nine becomes a zero and every country becomes one state
All you thought you knew was just a foolish assumption
Yes, everything is something. But something is nothing
Explain lyrics
Correct lyrics 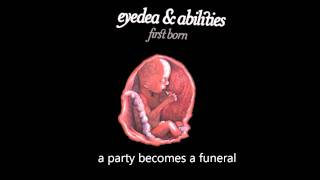