You know the type of girl that walks in front of you and makes your jaw drop?
She talks in riddles, and sort of tickles your soft spot
You see her in the club. She treats you like a scrub
She ain't trippin' off you, she got your whole crew in love
Your day dreamin' of getting her in the bedroom alone
Straight feedin', You's beg like a dog for the bone
And she's peepin', and the reason is she knows
Theres a demon in between your legs with a mind of its own
Now, you're a weakling, overwhelmed with hormones
Y'all start speakin', she grabs the number to your phone
And next weekend you invite her to your home
You weren't even thinking. You got played by a pro
She's a big shot. Thick lips, nice legs, green eyes
Took advantage of a thousand. Only slept with three guys
Ain't a hoe or a groupie. Jane Doe or a Lucy
Her innocent looks are deceving, so I'm telling you to be wise
I know she's a cutie, but there's power in that coochie
Underneath those booty tight, cutoff, daisy-dooksy Levi's

Now, what about that popular school kid?
The always have been, always will be cool kid?
The class president valedictorian. "A plus", star quaterback
Cadillac convertible drivin', signin' cheerleaders autorgraphs
The letter on the jacket. Medal around the neck
Pin on his chest, and mind on his rep
He only dates models. Drinks his Summit from the bottle
When he walks he waddles, and he ain't never lost a squabble
He put you in the locker, and took your girlfriend to prom
He's in your life everyday, and you can't wait 'til he's gone
But daddy owns a business, so it won't be long
Before he inherits it, makes carats, and sings a rich man's song
He's got the most expensive clothes and jewerly to wear
While your looking for a job, he's looking in the mirror He walks the halls surrounded by is fan club
Starts fads, ends trends, and hits the ceiling when he stands up
He's a preppy, fame hoggin', pig headed fool
When he has a party, everyone's invited except you
And your crew. And there really ain't nothin' y'all can do
He's in every state, city, and town, as long as they got a school

My favorites are rappers, the egoistical bastards
The people that never clap for your set, they think you're whacker
Than them 'cause they're the masters
I bet disaster is caused in their mind when you rhyme
and plaster their jaws shut with a fat verse
To him you're a hazard. Weak matter. A reason for laughter
He's preachin' he's live. But he's only that word backwards
After he dies, you can climb the ladder, start a chapter
Art you'll capture finally.
But while he breathes, m.c.'s don;t even flatter him
Add a tad if his acrobatical arrogance
To his genteically engineered emotional pattern of tearin' kids in battles
That'll explain why he mean mugs. He told ya' your team sucks
Said you dream of choking him with that mic cord
Instead, he blows your mind straight out your head
He says, "f*ck You!" with clarity. You cry hysterically
As it makes a parody of your passion
You tell friends you think he's tight
but secretly, you hope his career won't be lasting
'Cause he's an asshole. But you know he's got nice sound
You know what else? Your looking at him right now

(chorus)
I'm a big shot. Don't front, you know you love me
Girls never wash their hands after they get a chance to touch me
I'm a big shot. Hey, you can say I'm a creep
But put me in a room with your idols and I'll make 'em look weak
I'm a big shot. Shit, can nobody fade me
The only way we can do a song is if somebody pays me
I'm a big shot. Big Shot. Big Props
The best thing to ever happen in the history of hip hop
Explain lyrics
Correct lyrics 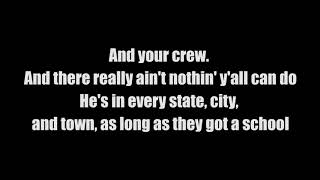