Well, my daddy didn’t pull out, but he never apologized
Rock and Roll means well, but it can’t help tellin’ young boys lies.
A baby on the way’s a good enough reason to get you out alive
Get you out without having to swallow any pride.

All my friends are restless, all they do is talk it down,
two or eight lanes, it don’t matter, it’s just another town.
There’s a fool on every corner, on every street, in every one
and I’d rather be your fool nowhere than go somewhere and be no one's

So Marry Me, Sweet Thing won’t you Marry Me
Your Mama thinks I beat anything she’s ever seen.
This old town’s alright with me, there’s nowhere I’d rather be.
Long as they stay mad at one another, they can’t get mad at me Every time I leave here something bad happens to me
Like a busted hand or finding some man laying where I sleep
She don’t mean nothing to me, that’s just how it goes round here
It’s a cartoon town, I play my part, and I ain’t spoke her name in years

I don’t want anything I done to be nobody’s fault
even if they got more money and mouth than they got balls.
That’s just how it went down, right or wrong, it’s just that way.
Just cause I don’t run my mouth don’t mean I got nothing to say.... 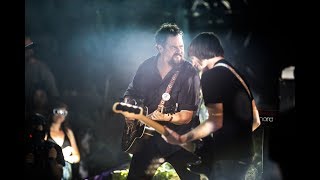