Do It Baby Lyrics

Do It Baby Lyrics

I do work and I'm workin' it with the will of a warrior
I'll take on 54 of ya, nah, I'll even take more of ya
Competition is great, and keeps me in shape
And it's mentally stimulatin'
Competitors constantly contemplatin' challenge
Champion's written all on my face
And I'm smirkin', and lurkin' back in the back
Attacking and hacking and jacking
Smacking up losers that's lacking
Characteristics of poets, they blow it
Tryna show it, yo if I'm flowin' they know it, so it
Compels me to step and release the rhymes that I kept
In case of an urgent emergency then these words'd be weapons
Any discrepancy heard'll have to be handled in haste
At any pace when I step in the place, cos I came to do work

Lyrically thorough, I'm from the borough of Manhattan
And when I moved to the Bronx, then I got into rappin'
Funky beats would control me
It's like the mic would say hold me
I do a solo, me only
I'd be alone but not lonely, cos
Eric would back me
The only track would be doubles
And when the rappers attacked me
They'd end up buried in rubble, cos
We never took losses, opposing forces proceeded
But they retreated, receded, beat it defeated We did repeat it as needed
Kept 'em seated and some felt cheated
Gave 'em all second tries and still I superseded
I'm a souped superior subsidiary of soul
I keep the crowd in control, cos I do work

I got a need and it's bleedin'
Inside of me to say words
Cos it's my choice and I'm voicin'
Just what I think should be heard
To a sleazy easy goin'
Lazy laid back track
The pace is slow, the bass is low
And yo, I'm ready to go
Do my job, I'm obligated, devoted and dedicated
And loaded and motivated to show that I know the way that it's
Supposed to be done, that's why I chose to become
Professional in this profession, droppin' rhymes on drums
It's automatic that static comes automatically to me
I've had it for longest been at it
So call it fad, it doesn't
Sweat me or get me uncivilized like a savage
I play it civil and give all I got to keep up the image of
Rap cos I happen to be a rapper and poet
Not just rappin' to be rappin' in case you didn't know it
Here's the deal, cos I feel
You oughta be up on what's new
With the rhyme it's time for me to do work
Cos I got work to do 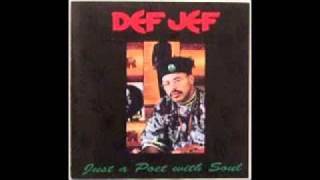