God Made Me Funky Lyrics

God Made Me Funky Lyrics


One time for your mind

[ VERSE 1 ]
You know it's gots to be funky if I'ma rhyme to it
Pick up where the others left off, and I do it
With so much soul, and so much self control
I'm a smooth operator puttin rappers on hold
Flowin like a stream, the rhyme scheme seems to gleam
Like a flashlight beam, but it's no dream
It's a real type thing. and it's happenin
Caused by applause, and I'm forced to get rappin
I'm rearrangin the lines, so I can change with the times
Cockin rhymes like nines and blowin minds
I glow and shine like a beacon when I'm speakin
Skin is light, but I'm not white or Puertorican
I'm an African descendant, very independent
I make my own money§ so don't worry how I spend it
Rappers follow me, but I don't need another shadow
Hollow MC's, don't even think about a battle
Cause if you got the mic, and you ain't rockin it right
I'll grab it, and drop the rhyme like a bad habit
Hey, I wouldn't have it any other way
So believe a brother when I say
God made me funky

[ VERSE 2 ]
Now the way I kick a lyric you would think I play soccer
Rhyme stays proper, get ill, I be a doctor
Operate, like a well trained surgeon
Take the competition, bust em out like virgins
They get strung out, high dry, and hung out
Without a word like a cat took their tongue out
Their rhymes were frail, pale, weak, and stale
But I'm deliverin a brand-new style like a mail
Man, rain and hail, and sleet or snow
No need to worry, cause I'm guaranteed to show
Up, right on time with the rhyme to entertain ya
On the microphone, and leave like the lone ranger 'Who was that stranger?' Shoulders be shruggin
Everybody's buggin
Rhymes are funky dope and keep the crowd want more
Like a junkie hopin to make that score
I'm a true soul brother, cause that's the way to be
And only true soul brothers can dance for me
Hey, I wouldn't have it any other way
So believe a brother when I say
God made me funky

[ VERSE 3 ]
You hear the rhymes on the radio, in the a.m.
On the am, then in the p.m., on the fm
Def Jef, and my rhymes'll stick witcha
Verses say a thousand words, just like a picture
And since I'm an artist, and my pen's a paintbrush
When they admire and inquire, I say, "It ain't much"
Rhymes flow natural like a second nature
And if you wanna get on the mic, you gotta await your
Turn, learn the fundamentals
Grab some instrumentals
Practice makes perfect, so rehearsing can pay off
But for now lay off the mic
And let a real pro show you how it's supposed to go
But hold up, let me hang my coat up
Let me clear my throat up
Hm-hm, now turn my mic up
Step right up, hurry, hurry, don't miss this
Watch me light up the mic like a Christmas
Tree, see, I mean business, I ain't effin around
Put the needle on the record by Jef, and you found
A new sound and you like the way the name sound
Plus it ain't the same sound, cause it ain't James Brown
No corny lyrics, I don't rhyme like that
But when you think about comin correct - I'm like that
I wouldn't have it any other way
So believe a brother when I say
God made me funky 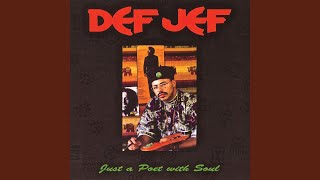