Jody got a cat but she won't let it out
Oh, tough luck, 'cause it makes Jack pout
Waiting on the wins he moves to the next
Searching for the cheese, looking for the text

In the Big Blue, in search of the skins
Grinning and laughing, laughing and grinning
Padlock Jody got the whole scene played
No knockin' boots till she's 14K'd

Diamond in the back, sunroof top
Waiting for the credit card so she can go and shop
Jack plays the back, just knockin' other socks
'Cause now in the hood he's 'Johnny The Fox'

Till one ring came, Jody blew a spark
Found about Jody round the corner in the park
Flipping like a dipstick, hip to the news
Practicing the range, bellowing the blues

Jack rolls the carpet in, swift like a skate
Yo, Jody, yo, gotta go, got a date
Padlock Jody's screaming, "Wait, wait, wait"
"Don't worry, hon," he replies, "I'm keepin' the faith"

Hooked by your ever-so-shyness
Want that bush, heard you're from Flatbush
Ran after ya, caught ya
Brought ya to Long Island, stylin' for a while

Is it 'cause you want my financial flaunt?
First you gotta please me, nice and easy
But I guess you want that in reverse So I stand Plug First can see

We got a serious block
Turn the other way, ooh, what do I spot?
A hoopin' Hey Love whose scent left a trace
Had a stash in her pocket with a body that's safe

Ball to the eight, now you wanna swing?
Forget the rap, yo, Black Sheep, sing

Ya banned by the preacher man
You played yourself a stew
Now to me you step, never mind love
The faith is being kept

Now remember 'bout Padlock Jody, here's the fact
Jack little wick but she was acting wack
Jack wanna lay but laying ain't exact
For the past four or five she was banned by the pack

Hip to the witness, putting on a plan
No money, no more Puddy Tat for the man
Jack knows that honey means playing a game
Only wanna bowl, got nabbed for the fame, goddamn

Sam was the man that you planned to command
Nothing new about a neighborhood
You know what? Padlock Jody wanna cut
Jack's thinking cap, make mine into a pack

So he begins with the ring, ring, ring
"Hey, Judy girl, how ya doin'
Seen you with another man, what you doing, screwing?
Ooh, shame on you, what, you can't wait
For the big bait, well, I'm ma tell you straight
Honey child, I'm keepin' the faith"
Explain lyrics
Correct lyrics 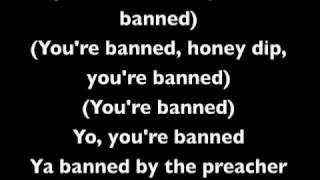