-- Welcome to the second installment..
Y'all know my name so we ain't gotta get into alla that
Y'all know the deal
This is AOI part two, and we call this one "Bionix" (Bionix)
And as y'all always know, we gon' hit y'all with that De La shit
Yeah.. yeah..

[Dave]
Ladies and gentlemen, we in the trench again
Makin it relevant, just for the hell of it
I'm introducin it, throw a little juice in it
Got on that old bullshit to get you used to it
It's been a minute now, only a minute now
A little re-evaluatin, hope you feel me now
I'm on some new me, focused on the new tree
Tryin to shake the money off the limbs so I can do me
I blame the fans for it, I heard demands for it
Went to Somalia, they holdin out they hands for it
Went to the hood, these niggaz tried to trace a dance for it
Dancefloor it after Mase brings you out of the break

-- Before we go any further we wanna send a special thanks
To all those folks out there that been supportin De La since '89
Now that's a long time
Overseas, city to city, state to state Yeah, we gon' keep bringin it live to you..

[Pos]
Unlike these underground MC's who rock for heads
We include the throat chest arms and legs
No need to spit in the cypher to show you I'm a lifer for rap
I cultivate moves larger than that
And I don't ball too much, ya dig
I gotta ball and chain at my crib who want my ass home
My heart-BEAT N.Y.C. metronome
But can't adapt to where I'm at
And even though I sing it sick 'til I'm blue, I'm not a crip
So unlike non-GANG members I won't C-walk to look hip
But if I had to join a gang I think I'd join GangStarr
Me, Guru and Primo with them beats for the car
that bounce trampoline style, revamp the deen child
Hot and mild and I hustle rap the same
Cuff a little shit, due to muscle fat, I gain
We them God type dishin the grunge to make you love

-- Yeah kids
Just a little taste how we gon' get things started in a minute
Sit back, get your headphones straight
Whether you're ridin in a Escalade or a Pinto son, turn that shit up
Oh remember AOI part three comin soon, on some DJ shit
Yeah - we about to get this shit poppin..
Explain lyrics
Correct lyrics 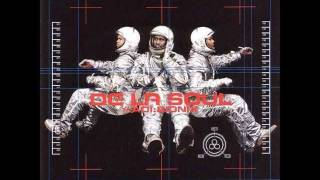