"Listen now Blind Baby what we wanna go for on this record
is not just a blues record - but we want a document.
An epic document depicting the struggle of da black people
against the white devil slavemasters."

[Verse One]
Sittin at the pad watchin cops
Trippin off the pigs keepin niggaz off the block
But don't let a nigga get got out the ghetto
cause you know gettin caught out the ghetto
is a motherf*ckin no-no
Cause you'll meet Mr. Boot, Mr. Feet
Mr. Billyclub and (who?) Mr. Concrete
Face down on the pavement
Keepin niggaz out of Crackerville, they do it and they love it
But vice verse the kicks
And put the Lench Mob crew, on the other end of the stick
Fee fie foe fum, the niggaz overcome
Everything is numb and it's filmed at eleven
It's like bustin caps at the bunny
You get a buck buck buck, buckshots in the tummy
They didn't have a f*ckin clue (f*ck you!)
Yeahh, it's time to get the ankle blues

"He is the epitome.. of anti-disestablishmentarism"
{*scratch*} "What's your latest hit brother?"

[Verse Two]
We caught the punk pluggin on our block
He looked like he's armed so I went for my glock
Call up the homies, look like we got one
Lay on the ground paleface, and that's when the fun begun
We beat him down like we were loco
(and said, "f*ck John Lennon") - (AND HIS PUNK BITCH YOKO) Steady takin charge of the neighborhood
We got a nine-eleven call on another f*ckin peckerwood
We rolled up on him and he broke
He looked like he was tryin to sell some f*ckin dope
Nope; we ain't goin out like that
That's when I let his ass have it with the gat
Shot him in his back, stopped him in his tracks
He will never sell dope to another f*ckin black
(cause it's like that)
It's untraced without a clue (f*ck you!)
Yeahh, his ass caught the ankle blues

[Verse Three]
Nigga nigga nigga nigga, nigga damn fool
(MONKEY SEE, MONKEY DO!)
House made nigga's on his way with a fat pay
But the motherf*ckers, paid for his doomsday
We laid in the cut for some days
Trippin off this nigga lookin like he's in a daze
What do whitey what do whitey really wanna know?
The outcome of a sellout, is an oreo - yo
We hung him by his neck til it snapped
That's when my homey woke me up out my nap (wake up 'loc)
Wakin back up to the signs of reality
Trippin off the shit that we watchin on TV
Them motherf*ckers think I'm soft (PSYCH)
It's a sign of the Lench Mob settin it off
It's untraced without a clue
It's the niggaz, that's catchin the ankle blues! 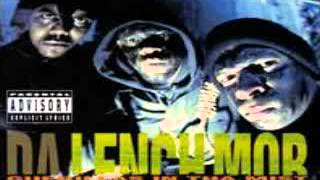