We're looking for a better world, but what do we see?
Just hatred, poverty, aggression, misery
So much money spent on war
When three quarters of the world is so helplessly poor
Major General Despair sits at his desk, planning a new mode of attack
He's quite unconcerned about chance or risk
The Major General's a hard nut to crack
Oh yes, he designs a cruise missile, tactically sound, operationally OK
While the starving crawl onto the deathpile
They can't avoid their fate another day
Attack on the mind, but he calls it defence
But I ask you again who's it for?
Do the starving millions who don't stand a chance
Hope to benefit by his stupid war?
Babies crippled with hunger before they could walk
Mothers with dry breasts cry dry tears
And meanwhile Major General Despair gives a talk
On increasing the war budget over the years
How can they do it, these men of steel
How can they plot destruction, pain?
Is it the only way they can feel
By killing again and again?
Is it some part of themselves that has died
That permits them to plan as they do?
Or is it us that is dead, do we simply hide
From the responsibility to stop what they do?
There's so many of us, yet we let them have their way
As this moment they're plotting and planning
We've got to rise up to take their power away
To save the world that they're ruining
They're destroying the world with their maggot-filled heads
Death, pain and mutilation
They've got the responsibility of millions of dead
Yet they're still bent on destruction
The generals and politicians who advocate war
Should be made to wade in the truth of it
They should spend sleepless nights shivering with fear
And by day time should crawl in the deathpit
They'll find the truth of what they've done there
Festering corpses they and their kind made
Eyeless skulls that endlessly stare
Having seen the truth of military trade
The earth was our home, the wind and the air
The blue sky, the grass and the trees
But these masters of war, what do they care?
Only sentiments, these
It's our world but through violence they took it away
Took dignity, happiness, pride
They took all the colours and changed them to grey
With the bodies of millions that died
They destroy real meaning through their stupid games
Make life a trial of fear
They destroy what values we have with their aims
Make us feel it's wrong if we care
Well, we do care, it's our home they've been at it too long
If it's a fight they want, it's beginning
Throughout history, we've been expected to sing their tired song
But now it's OUR turn to lead the singing
Fight war, not wars, make peace, not war
Fight war, not wars, we know you've heard it before
Fight war, not wars, make peace, not war
Fight war, not wars, make love, not war
1-2-3-4 we don't want your f**king war
Explain lyrics
Correct lyrics 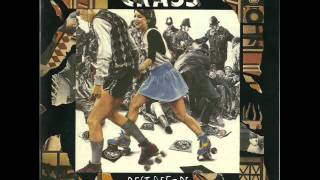