Big A Little A Lyrics

Big A Little A Lyrics


"Big A Little A"
by Crass originally recorded
in 1980.
Big A little A bouncing B
The sytem might have got you but it won't get me
1 2 3 4
Chorus:
External control are you gonna let them get you?
Do you wanna be a prisorner in the boundaries they set you?
You say you want to be yourself
By christ do you think they'll let you?
The're out to get you get you get you get you get you get you
Hello, hello, hello, this is the Lord God, can you hear?
Hellfire and damnation's what I've got for you down there
On earth I have ambassadors. archbishop. vicar. pope
We'll blind you with morality, you'd best abandon any hope,
We're telling you you'b better pray cos you were born in sin
Right from the start we'll build a cell and then we'll lock you in
We sit in holy judgement dondemning those that stray
We offer our forgiveness, but first we'll make you pay
Chorus
Hello. hell. hell, now here's a message from your queen
As figurehead of the status qui I set the social scene
I'm most concerned about my people, I want to give them peace
So I'm making sure they stay in line with my army and police
My prisons and my mental homes have ever open doors
For those amongst my subhects who dare to ask for more
Unrulyness and disrepect are things I can't allow
So I'll see the peasants grovel in they frefuse to bow.
Chorus
Introducing the Prime Sinister, she's a mother to us all
Like the dtch boy's finger in the dyke her arse is in the wall
Holding back the future waiting for the seas to part
If Moses did it with his faith, she;ll do it with an army
Who at times of threatened crisis are certain to be there 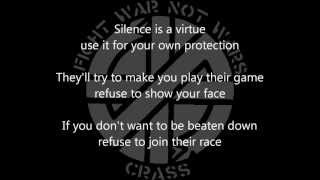 check amazon for Big A Little A mp3 download
these lyrics are last corrected by Jonski
browse other artists under C:C2C3C4C5C6C7C8
Songwriter(s): Penny Rimbaud
Record Label(s): 1981 CRASS
Official lyrics by