[Chorus: John Legend]
They say "What's happenin'?"
We say the facts and if, they lie...
We comin' back for them
They might say... but they don't know!
(They say, They say...)
They don't knowwwww

[Verse 1: Common]
They say a nigga lost his mind
But in the scheme of things I never lost a rhyme
The thin line between love and hatred
I'm the black pill in the Matrix, the saturated life
They say life is what you make it
So I wait quick on a spaceship so I can take it
As high as the stakes get when paper get low
I be tellin Derick, "Tell Kara get us a show"
Little Com, I make righteous bitches get low
The richest man aint necessarily the nigga wit dough
They say "You ripped" "Wow..." Yea, that's what they say
My niggaz couldn't tell it was me, like Jamie in Ray
Paintin a day, wit focused crime, broads, and good wine
They say "Dope is sour so it's homework and hood crimes"
I stood mine, for forever and a day so goodbye
They never could say - tell 'em, J

[Verse 2: Kanye West]
Ahh... The sweet taste of victory
Go head and breath it in like antihistamine
I know they sayin "Damn, Yay snapped wit this beat!"
f**k you expect? I've got a history
Groupie love now, gotta be them wheels!
Haters back down, gotta be that steel!
I know they cant wait till ya outta ya deal!
Look how they did D'Angelo ask em how do it feel!
My best friends worry bout me
Cause they know when you famous/fame-ass
And you had made cash the media aims at us and you be up so high
if you ever fall off, it feel like a plane crash
But God don't ever give me nothin I cant handle
So please don't ever give me records I cant sample
So I could vacate where it aint no channels
but it's quite ok for a gangsta to wear sandals
They say because of the fame and stardom
I'm somewhere in between the church and insane asylum
I guess it's messin with my health then
And this verse so crazy when I finish
I'm just gon check myself in - again

[Verse 3: Common]
They say "Dude think he righteous"
I write just to free minds, from Stoney to Rikers
Amongst the lifeless, in a world crazy as Mike is
On my paper, whether its weed or Isis
They say "life is a game," so I play hard
Writin for my life cause I'm scared of a day job
They say "Sef kept the hood together"
I tell the young, "We can't play the hood forever"
Play my cards right, they say I went to left
They showed me strange love, like I was Mr. F
Played chess in this game of, pawns and knights
Now I claim "King" like Don, or Frank White
They say my life is comparable to Christ's
The way I sacrificed, and resurrected, twice
They say "The crochet pants and the sweater was wack"
Seen "The Corner", now they say "That nigga's back," uh... 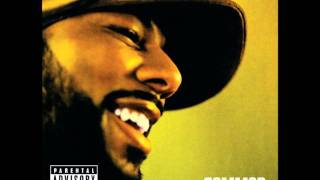