You're not gon' believe this!
This is really happening, everybody stand up
Oh, Tech Nina! Chino XL, everybody rise!
(Fire!) It's like hell on one song
(Fire!) It's like the whole hell on one song
(Untamable, nonflammable)
One stage, one hell, one song
Instead of hard-ass niggas they bring women
And they mimickin' men again, when it spin it's freakin' feminine
Shit is sugar and cinnamon, this is hood and it's hitting
Adrenaline, sinister sin again, niggas diminishing
Finishing puffs, let thy fags bat they eyelash
I clash with industry enemies, kiss my ass
If you think you runnin' with my cash
Ain't no tellin' what kind of the calibers fly past
Soo-woop in this, my loot's in it, so I'mma shoot with it
Boosted it, my crew spit it, like Amaru in that Juice flitick
Now *'s neck tie is loose fitted
Nina left them laying like a razor blade noose did it, who's with it?
Tech Nina and Chino's Katrina flow wrecking *
Let's team up with lingo that'll bring us more chips than Casino
Now everyone's paid, maybe cause the gun's played
Nina and Chino XL, one song, one stage
I'll smoke you, like a detriment to the environment
While you stand in astonishment wondering where the sun went
Abandonment in war, hesitant after the message I sent
You're praying that I'm catholic and murder's what I'm giving up for lent
The road that I'm traveling is sharper than the surgeon's scalpel
When the screams of death * * militant Adam's apple *
Acid *, feeling like a slave when he was shackled and
More beef than even the IRS and Willie Nelson was in
Making the venomous cringe in the head Fortune, torture, scorching my skin, still injected into my skeleton
No embellishing, poison pen, prodigal protestant, modest
* * * with a hatchet, walking in bloody moccasins
Been particularly partial to hide the harsh arsenal
Inside a sparse hospital, spacy bars like Mars, completely orbital
Ain't a record company that can market you
Chino the narcissist, heartless hunter, I will carcass you
God said, "Let there be light"
I said, "I got you, my nigga, tonight, but that's only cause you asked nice
My occupation spit sick lyrics outta my mouth
I clocked in the job when I was nine and I'm never clocking out
Face it, every verse Chino basically kills
So I stick to the script like an actor with no improvisational skills
Dudes mad that what I'm recording is more important
Than adopted an orphan or Slick Rick being deported
Or the bootlegged Jordan you wore and you tore in Florida
Fallin' for a foreigner whore in a Porsche, now she extortin' ya
Sorry ya can't get my warrior formula, you're too dumb
Screaming 'bout money and bitches, nigga, you ain't got neither one
The verbal clergyman serving disturbing effects
With permanent Terminix for ticks that's coming out the woodwork next
C-Cartridge spitter, surviving the harshest artic winter
Lethargic winner, sinner, still centered as one of Gods'
Incredible carnivorous critters, sicker, killer arch
Chino did for lyrics what the movie Jaws did for sharks
Lyrical Jesus and Tech N9ne, spaz, promo
Pass loco, y'all rappers are mad homo, cash bonos 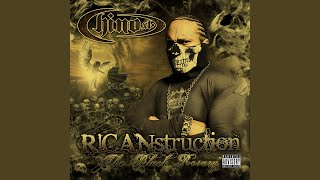