(Chorus)
you know, how I always do, Chino XL,
with the skills thats tried and true, Chino XL
after all that I been through, Chino XL,
Violate me, I'll murder you, Chino XL

(Verse 1)
These rappers don't want it with big Chino XL
I'll kick em in there necks and watch their bruised jaw swell
But all hail the last verbal murderer left, I'm certain death
Refer to me as less, but do it under their breath
Cause I be hearin the theft in they rhymes that they said
But when I see em they bowin down like they bout to give me head
I'm upset, yo lets get it on,
Birds fly upside down over ya head, cause you ain't worth shittin on
Hard you on the radio, what would I change
The station when its on, I call the DJ and complain
Its a shame, your recording all wrong
You made a 3 minute song, thats 3 minutes too long
Got flex droppin a bomb for the king of metaphors
Remember they ain't stop makin guns after they made yours
Y'all shittin in y'alls drawers, wonderin if I'ma diss 'em listen
My rhymes tight when I piss it be whistlin
Your decision that testin my expertism in combat,
I'll expose that your not real like the "Blair Witch Project"
As far as that album you dropped, I ain't feelin it
I wouldn't buy your record if it had a hundred dollar bill in it...
I'm killin it

(Verse 2)
Scream what the chorus is at live performances
I be so high I be mistaking the whole front row for stewardesses
I proved who the rawest is as time passes
And f*ck smoking weed, I'm smokin Bob Marley's ashes
Let me introduce you to that yellow nigga illin,
Breakin sky scraper rappers down to they tenement buildings
Not respecting opinions or feelings, stop crying like women
You know you non-violent as Martin Luther King's sittings Head spinnin, lieutenant, menace, don't listen
But me knee deep in the blood of your crew and your children
Your neck stiffens, forget riffing, when you see me
None of my gunshots are sound effect CD's
Emcee's talkin bout how they spit, and they shit
I do every bodily function on a nigga when I rip
My format pushes your entire crew into the floor mat
You'll be needin pet cemetary to try and bring ya dogs back

(Verse 3)
Still floss on the daily, out of the ordinary
Surviving drunk driving with Halle Berry
The wildest of any emcees, I'm hostile and irresponsible,
The ill tonsil Chino XL the stench of God's nostril
Collosal with the gothic, gospel goodwill,
Win awards and thank XL for making all things possible,
Philosophical thug till I stop breathin,
I'm so ahead of my time, my parents still are in diapers and teething
Jesus' tears couldn't dampin me, horses can barely trample me
You bit me so hard, why ain't you just sample me
Chino XL's the wrong one to violate, primate
I don't even speak english, I speak hate
I cheat fate and move death closer, Derek Barbosa
I beat Macy Gray to death with Erykah Badu's poster
The new chocha that I hit on top of Luke's sofa
I'm her new owner, shes pickin me up in Huge's rover,
Chino dissed me, rappers whine,
To disrespect you, I would had to have respect for you at one time,
I never did, and don't care, so come up on air
Put your money where your mouth is, make my crotch a millionaire
Air fair, exotic vacations,
Bought my mom so many minks animal activist plot my assasination
I'm rockin from aggravation, shit on any compilation
Amazin with rhymes wrote while the president was Ronald Reagan 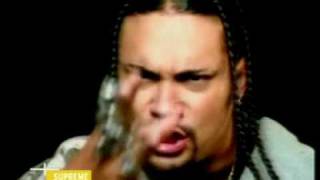