* author's note: this is the song that got C-Bo locked up for parole violation

You know I never was no choir boy
Ya folks got a, gang of priors
Maybe that's why the one-time's be triflin
Tryin to give a young nigga thirty-five to life
When I ain't even done nothin wrong, off-icer
I have no in-fo to offer-ya
He asked my name, so I came off the brain
Told him, "I'm John Doe and this is my hoe Jane"
He said, "Smart mouth nigga, don't make me do ya"
Put my thumbprint in his high tech computer
My name came back with a warrant, felo-nies
Now they got me down-town, spread my anus
Buttock, I'm like, "What the f*ck is it now?"
He said, "You robbed a liquor store; we know where, when and how"
It's foul, they got a nigga to' up from the, flo' up
My mom, in the courtroom lookin like she bout to throw up
It's a strong armed robbery, strapped in the commision
at my pre-trial conference, D.A. had a proposition
He said if I lose at trial I'd get the ? with the L on top
but take the deal he'd give me five with havin most of the charges dropped
Hopped on the deal quicker than blast, and said
"I admit that, but two and a half ain't bad I got getback"
They sentenced me to five, two I gotta bring
It's only strike one swing, batta batta swing

It's one-eight-seven on the D.A., cause they
ain't tryin to give a young motherf*cker no leeway
Yes yes... y'all
One-eight-seven on the whole courtroom, motherf*ck em all
You better swing, batta batta swing
Cause once you get your third felony, your fifty years you gotta bring
It's a deadly game of baseball
So when they try to pull you over
1 - shoot em in the face y'all
2 - shoot em in his face y'all
3 - take em on a chase y'all

Fresh out the pen, unrehabili-tated
Doin hella good, and my P.O. hates it
Hates Dick, she's a dyke lesbian bitch
Can't wait to violate for me for some petty ass shit
I gotta get a job, so I'm fillin out applications
Fightin the temptation, to slang nightshift, uhh Minimum wage don't get it, five bucks a hour
don't cut it, man I ain't widdit
So f*ck it, I went and struck it rich, on the dope sack
My homie gave me two, and told me to bring a fo' back
Now it's time for me to start havin thangs
I flips me a Coupe and painted it candy-apple green
It gleams, clear coat sprayed on thickly
Fools out to get me cause my shit is lookin sticky
I'm at the club and I can feel them suckers scopin
I'm knowin they plottin on me, but I'm still hopin
that they won't fry me, unless they wanna die
They will be, drippin more blood, than Mrs. Simpson was
Sho' nuff, ain't no bluff, here them suckers come
Got me reachin up under the panel to handle the forty-four caliber gun, uhh
Spun his ass around with one of the fat Magnum rounds
Got him on the ground makin funny sounds, ohh
I got a problem, witnesses ten
Positive identifa-cation

On swoll in the pen, cellmates with X-Raided
Now I'm on parole, five years later
The Bo loc is ready to have me a ball
f*ck my P.O., I'm goin AWOL
And you all can suck this dick, I'm sick
and tired of goin through all this bitch-made shit
I got two strikes right now as we speak, and peep
I'm not bout to let you motherf*ckers do, me
I'm petty with a prior, will buy your fate
With Wilson in the office, you gets no date
So I'm putting all my belongings on Greyhound bus #22
Bound to another state, me and my crew
Unpacked my shit, stacked my grip
California and Pete Wilson can suck my dick!
And if you didn't already know, that you couldn't
trust his ass, just look how he did Polly Klass
Used her death, and her family's name
so he can yank more votes, and political fame
It's a shame, that I'm the one they say is a monster
Juvenile delinquent, steppin out of sync with
but f*ck THAT, I ain't goin out, like a punk
That ain't my style, rip him from his asscrack
to hit nutsacks now, they wanna kill a nigga
like me I blast one blast two that's strike three 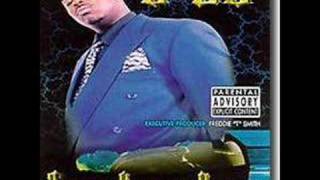