Kicking it, strap on my side and I'm so high
Thinking bout them putos that tried to do the drive-by
Creeping in the alley, ese this ain't the valley
Cholos are deep in a f*cking brown Caddie
Drop to the floor, a f*cking four door
(There's some putos we jump)
Ese they're coming for more petho
Watch real close as I level
His head to the seat, my quette he hands me
Six feet deep is where this culo stays
Although in a coma for a couple of days, anyways
That's what I see on 21 Street, where we meet in the big SC
South Central is loco represento
The crazy ass Eastside is in your f*cking mental
Lento, but harder than a motherf*cker
Catch me on a bad day knockin out a clucker

[Chorus x2]
Creepin through my neighborhood
Quette on my side, always up to no good
On the Eastside, where the balas fly
Only true gangsters ese, I don't lie

Now all you cholos know we gotta handle our streets
Always keeping trucha cuz the black and whites creep
All gotta pay dues, think it's time to take a cruise
Bensando in my hand, f*ck them fools
They throw a rat on the f*cking murder rap
Now it's time for us to go on back
Simon, we're the ones you putos can not stand
I'm coming to get you with a quette in my hand
Damn there he goes, stop, I go, I caught his ass quick
Nada me duro puro, blu blu to his stomach I stuck
Two balas at first then one on top for luck
f*ck I gotta go, this puto needs no more
To make our escape we just drove away slow
We gotta handle ours, leaving scars Q-Vo to the homies behind bars

As I light and hit the sherm stick
I sit back and think of doing crazy shit
So we roll, and it's late at night
Got my little homey Sharp, and Wicked by my side
Rolling in the G-ride heading out the East Side
Ahora en la noche some bendejo dies
Simon, it's all a gang trip
If you're in it and you know it say "you better not slip"
Crazy cholos don't give a f*ck
Simon, f*ck the juras my dick they can suck
Straight gang-banging till the day I die
Senor Wes I'm innocent, I don't lie
Big pantalones, creased out, t-shirts
Hitting it with the homies always putting in work
Sur, X-Tres is where the f*ck I roam
Los Angeles (East Side) is where I call my home

Enemigas try and fade, when we show up they run away
I guess they seen us coming with our guns ready to spray
You look like a bitch when you run from us
I know you know we got guns that bust
Plus you know I'll peel your f*cking cap
Didn't catch you yesterday but I'ma get you off the map
So strap, cuz they only way you're lasting if you're f*cking blasting
Never recognize me cuz I'm always masking on a mission
All the santos missing, then they shoot this fool and then start dissing
Display my motherf*cking gangster's way
Spit on his ass, tu pinche madre
Just like that, making putos disappear
Y que, at least I'm still here
No fear, those majotes and my Mexican Pride
Jump in the lowride and cruisin through my East Side 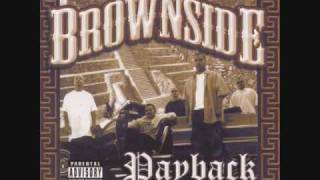