Got the f*ck up to another crazy day
Got my travos, hit em up and I was on my way
Three Flowers in my hair, creased up and my gat
A half-way joint in my ear and a twenty dollar sack
Jumped on my cycla and I rolled to the hood
Smoking a toke, getting high feeling good
Rolling South Central through the crazy Eastside
Made a stop and got the homey and we went for a ride
With some black spray paint we went strinking up
Crossing motherf*ckers out and leaving up our block
Shaded in and all that with all the homies names
Eastside South Central's where the f*ck we claim
Rolling on the cruiser got the homey on the bars
Watching out, keeping trucha for the black and white cars
Another crazy day rolling through the evil side
Throwing up the hood to every fool that drives by

Gang-banging like a motherf*cker, down for my shit
And giving up a chance for any fools to trip
Blue-ragging to the heart to represent where I'm from
I'm a soldier from the South and I'm known to hold my own
Down with the homies, always rolling deep
Late at night, keep trucha cuz we're out on a creep
Leaving bodies behind, putos coming up dead
One to the chest and three to f*cking the head
And roll back to the hood and not give a f*ck Smoke a Kool to the brain till we can't f*cking walk
Simon that's how it is in the crazy ass hood
Rolling deep, gang-banging always up to no good
Hanging out on the corner, creased gangster'd out
Motherf*ckers know what's up cuz they don't even come around
We got the hood blocked up, the Eastside everywhere
South Central got these motherf*ckers running scared

The gangs of LA, they'll never die
They'll just multiply
All you putos who ain't real
Ese keep trucha for my steel

Another crazy day, another crazy trip
The homies don't give a f*ck cuz they're down for their shit
Los Nightowls, Tiny Locos, Crooks, and the Tiny Dukes
The traviesos and the locos always smoking that juice
Crazy motherf*ckers we don't give a f*ck
Another crazy day just hanging out on the block
Always watching our backs, keeping trucha, looking out
That's just how it goes in the crazy ass South
Los Angeles, Califas crazy 213
Always running from the motherf*cking LAPD
Simon living life, hanging from a string
But I don't give a f*ck because it's all the same thing
Creases in my travos, white Nike shoes
Wearing locs, blue rags, and giving putos the blues
Another crazy day, another day gone by
Hanging out in the hood of the crazy Eastside 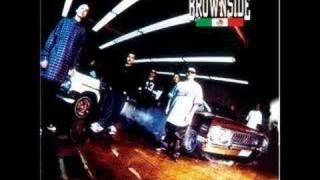