Made a song to kick back from a gangsters point of view
Clowning in your ride, gang-banging, shake your head to
f*ck it up ese on this down ass track
Because it's all about the Raza holding nothing back
Orale pues homeboy, I know what you're saying
I'll kick it for the Brown and on the Brownside we're staying
So light one up and let me take you away
To a crazy ass place, South Central LA
So kick it with me loco and let's go for a stroll
Soy cata para car pues I'm ready to roll
Now we're strolling down the calle and you know we can't slip
I'm holding down my strap to hold down the Eastside
Cuz if it comes down to it, for the hood I'm gonna die
That's just how it is, if you play you know you pay
So take it from a loco off the streets of LA
I'm down with my homeboys cuz they got my back
And if we run into some shit we cuz putos no slack
From Southern California so you know what's up
From the Sur of Califas where we don't give a f*ck

Bald head, Ben Davis and all that bullshit
Gangs killing gangs, motherf*ckers don't quit
When I'm putting in work some putos like to rank out
You vatos ain't shit and need to get taken out

Packing my quette everywhere I roll
Not cuz I'm scared, but that's the rule of South Central
Now you have a f*cking gang on every f*cking block
From 13th Street all the way down to Watts

But it's still South Central calling all the shots

*scratches*
..kicking this shit for all the homies on the Eastside..
..Brownside..
..simon..

Little knucklehead vatos out banging non-stop
Killing motherf*ckers and not giving a f*ck
LA is the place homeboy, let these putos know
Give it up for Surenos, South Central LA
California to my heart, and the Trece to my grave
f*ck yea homeboy you know how shit goes
Straight gang-banging and I'll never quit
Striking up on walls and hitting up my set
Throwing up gang signs and putting putos on check
Blue-ragging for the Sur not for nothing else

A loco motherf*cker in and out of jail cells
Looking at shit from a gangster point of view
I'm banging with the homies cuz there's nothing else to do
You might say there's no home or no future in this shit
But I'll die cuz I don't give a f*ck I'll die befre I'll quit
My gang is my life, and I'm in it to win
Holding down my nickname and give a f*ck if I sin
I'm down for my homies coming straight from the heart
Cuz it's kill or be killed cuz we'll never fall apart 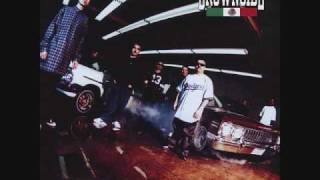