What The Fuck Lyrics

What The Fuck Lyrics


[Lord Jamar]
Once again it's the dread and the bald head
Won't be satisfied til the devil's I see em all dead
Layin in a mass grave, for the past slaves they were stayin
Do you think a nigga forgot? Matter fact
my trigger's hot, you blink you gettin shot
And if the weather's hot, your body's gonna stink when it rot
Lord J got the arms, Sadat got the bombs
We don't feel shit, you cried a hit on ya moms
Now leave the bloody bitch in a ditch
Get'cha pretty penny if the mother of my enemy
My brother's sendin me four bursts from down south
And for the lies you told, I'ma buck you in the mouth
Now what the f*ck's this all about?

[Sadat X]
Everybody gotta weapon
Who's gonna let burst the first shot? Hmm, I thought not
Feel the battle, tell Darryl that his first-born is dead
Shot in the back by the task force
I'm mistakin your face in a similar face
Got em murdered
much like how the buffalo is herded by the pale face
who threw some game on the Indian, who got jerked for New York
You better walk, got caught then wear your vest
We might throw somethin that's hollow Brand Nubian ain't never been the ones, to follow nobody
We gotta lotta arms but I like to pump the shotty

Now what the f*ck's this all about?

[Lord Jamar]
It's all about brothers risin up, wisin up
Sizin up a situation, but gettin fit within the nation
No deviation, a straight pathways down my wrath
I sing sounds of math on behalf
of the Gods and the Earths, birthplace in space
You be f*ckin with my turf when you be f*ckin with my race
Now face, your maker and take your last breath
The time is half past death
now what the f*ck's this all about?

[Sadat X]
If you're less than a man, in my eyes
then your head's off, and I'ma set off the wheels
Motherf*ck the baby seals or savin the whales
All the crack sells, it's the armageddon
............... so cancel the wettin
Go in the garage, find that old camouflage
blend in like a mirage and explode
Take nothin lightly, crackers shootin nightly
Cos I don't need nobody that's gon' shoot me in the back
Black people show 'n' act and when they front, that's wack 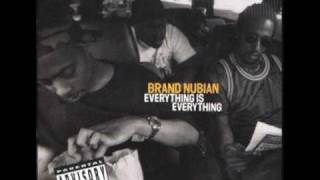