Them callin' me Mr. Bill Collector,
Needin' me money, no ease up tonight,
(See niggas can't stand us, so they label us scandalous)
And if them runnin' off with me cash,
That ass gonna have to pay the price,
(Meet a muthaf*ckin' po-po; gotta hit 'em with the fo'-fo')

Don't be f*ckin' with my money, nigga no,
See when Krayzie pull the pump, then I kill 'em all.
Pump slugs, when blood hit the wall, watch 'em fall,
Now dog who ya gonna call?
Puttin' niggas in the coffin where they probably better off
And Leatherface is not a punk bitch so a nigga just can't f*ck me,
Nigga better have me cash,
Or I kill his whole family when the twelve gauge pump blast,
now test me,
Never ever let a nigga ride when he think he fin to slide,
Pop him in the spine, get him for the money,
Nigga tried to play me and dash,
And that's why me thugs should put slugs in that ass, then tell he
And me never want to see no,
Oh jealous muthaf*cka tried to keep a nigga ends low,
If he scared to smoke a primo,
Gotta go with the fiends and in the click is a no no.
Gotta make that money man,
Gimme all my change, it's a murder thang, now
Even in the dummy game,
niggas comin' up slain for collectin' they claim
Now, Leatherface, me pick up me gauge,
leather mask and nigga, me blast,
So ya better respect us, when you see the bill collector,
Rippin' killin' niggas for that mad money thang

Niggas steady payin' them dues, runnin' with trues,
Nothin' to lose, everything to prove,
Little thug from the C-Town, never caught sleepin',
Always on the come up creepin',
Runnin' this shit now puttin' that Bone down,
Gotta let a nigga know for the love of cheese,
Movin' thangs in the nine-five, rollin' with
Ruthless, thuggin' with my niggas from the Clair,
And we smokin' them green leaves, f*ck with me now,
Oh nigga don't test rest, straight Leatherface in the place
On a mission don't be messin' with my bankroll,
Niggas wanna gank on Bone, so I stack them prank hoes,
And I'm bettin' on me takin' no more losses,
Put 'em in a coffin, and they life is better off,
And these niggas they don't know me they can't know me,
Thought you had a homie, but ya f*ckin' with the muthaf*ckin' Bone see, Nigga gotta get me mine on the nine-nine,
In the nine-five, bodies dropping
When you hear my pistol select ah dome,
Respect that True how's the underground shit,
Mr. Bill Collector, Bone

Nigga take it off thank ya,
Please don't make me stank ya,
Time to pay the bill, write your checks up all night,
Catch a slug or chill, bill collectors better respect 'em
Mo Thug, sellin' dubs, pumpin' slugs all up in that rectum check 'em,
Click-click, fall to the ground when the glock pop,
nigga chest pump blood,
And takin' too long, better drop it on down,
or ya catchin' two to the head,
Shoulda gave 'em up bitch,
To the Mo Thug lunatic quick to pop, now you dead dead,
Gotta pull that nine on the niggas everytime,
Sellin' rocks on the nine-nine,
Gotta put him on the pave,
If ya want to die, put 'em in the grave,
Better give me all them dimes.

I didn't want to take his life,
But the nigga tried to run and get away with me llello,
(Now you see me, the murderer.)
[4x]

[Verse 4: Bizzy Bone]
Sawed-off pumpin', dumpin'
Steadily all the way to the other side we ride,
Sherm, when I hit that corner now, niggas is 'bout to die,
Thugsta theivin' off in Cleveland,
And I couldn't sell out my ci-ty,
Murder now to come up, move,
Bone'll be bringin' that city, wit me pin me,
Nigga, this the team, by the way, don't f*ck with brains,
Put in my mind all off on my murder,
Murder y'all all, and I flees the scene.
Clean, and I'm out to fade 'em.
Hey, and I'm out for money, gauged 'em,
Better pray to save 'em, but it won't do any good, now.
Bang bang, caution I lossin' me brain,
Get 'em up off the 'cane, bang,
Kill a nigga, bang,
Peel a trigger, bang,
Comin' up out to wet 'em, man.
Off with the blood,
Put 'em in the mud with a slug thug gotta get paid,
Reachin' on back as we bail to pick up me shells,
No slippin' the buck and the gauge spray,
Sawed-off on the block cocked, ready to pop ya, now,
'Cause broke gets played,
This dope get paid,
And nigga, come drop it down 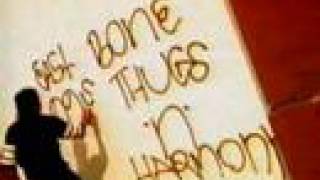