Whom Die They Lie Lyrics

Whom Die They Lie Lyrics

[Bizzy]
I promise that I'll hunt you bastards
Zip 'em in casket, here to get drastic, fast in a hurry
Is you ready for me magic?
Let 'em blast, and nigga, better burn
Then move, true to the murder mo, gladly
'Cause the haters never had to have me
Want to follow fools through alleys
'Cause ready to lose and daddy
who raised me like Layzie, Krayzie
Probably St. Clair babies, so hate me
But I handle my business
So lately I can handle my shady
Kill 'em, but we think I'm a bomb again
No leavin' as they put me in prison and give me time
I'm ready for the gun to go get'em
And I'm a fill 'em with eleven of mine and one die
Is he ready to lie if I decide
Lookin' at my killin's in his eyes and boom to go bye
I'm gonna fly (fly)
Whom die they lie

[Flesh]
Whom die they lie

[Flesh]
Whom die they lie [Shot]

Now, who wanna go snitch?
Talk shit about real trues, still be payin' dues
Saw them sneakin'
And a nigga gettin' sick of all the playas, they hatin'
Why so many fakers runnin' they mouth about shit and they lose
Lookin' so deep eyes, and tell it when they lyin'
Stop tryin', but they never convince none
Got hundreds runnin' up with gauges
Still I'm sure they sure they fryin' us, but I buck
Sometimes I save it, for me kill 'em off late at night
So, what if it got too late for me to get 'em?
Then gotta switch to testin' G's
In this game I aim to keep away from every crazy steady
we're too quick to pull petty bullshit
Y'all thought that you could f*ck with the Cleveland thugstas
#1 fillin' his gun, and I wish you would
Bitch, pop, pop and pump and have to show you through
When Mo' thugs comin' in, it's a headline
Time to get on top of moff top
When they got on stages all over this nation
World, and I plan on
Now look at you bustas get mad
Beat the f*ckas on their own line
Don't make 'em tell it to ya twice
When you crack a grip, keep it real
But you should die, pay the price top
Whom die they lie

[Layzie]
Whom die they lie

[Layzie]
Whom die they lie [Shot]

Time to stick it for the thugsta, thugsta
Little sneaky muthaf*cka on a mission Grind, be plottin' for it quickly
Who fried? Do or die, nigga
You and I for the creep on the come up
And pay these niggas a visit
So is it, was it, wicked ways
Got me strugglin' for days
Hey, a nigga's gotta eat, so yo
I gotta get paid and blaze
So swift not to catch a case
Crept up in his place
While the nigga was gone for his safe
And his stones, and it's on
'Cause the Bones havin' a say
I won't forget this evenin'
Nigga had theif, Little Layzie Bone
Thievin', 'cause he had cameras hid off into his ceiling
Pin me, niggas run away
They said they lookin' for me
But I'm a find a nigga killin' before this nigga find me
Y'all niggas know a murder-bound city
See me when I'm servin' now, parlay it down
Breakin' it down in the C-Town
Spot 'em on the avenue, follow him passin' through
Get 'em at the next red light, green light
Got the go ahead, infrared on your forehead
Whom die they lie

[Krayzie]
I'm that nigga with the shot and, red-hand
Answerin' niggas, poppin' enemy
Drop 'em
Me gotta get 'em
Kill 'em before they get the coppers on us
And you know the bitches want us
But as soon as they close, it's the pap pap, pardon me
Take a look, and what you see;
Krayzie still runnin' from the police
'Cause I got a f*ckin' bag of weed
I'll be leavin' sale now on the scene
I can do it, I can kill 'em if he gotta be a casualty
He after me, but I'm a put a bullet through your head
Shoulda fled, but you didn't, so bye-bye
Take 'em a couple a days to get your body outta the sea
Meet your f*ckin' fate and in grave lay
St. Clair, Wasteland, all my niggas comin'
Oh but they can't take it, if you wanna make it
Break 'em, hey, or can't a nigga get paid
Or your f*ckin' with some niggas in some desperate days
Crime, yes, it pays, if it's cool with it, cool with it
Never act a fool with it, broad, 'cause your losin' me
Tell a muthaf*ckin' nigga, 'cause a nigga told another nigga
"I know who did it"
Rollin' with the thuggish bunch of all
Testin' nuts, and, nigga, we'll cut your balls
It's Mr. Sawed-off, Sawed-off
Whom die, die, whom die, die, they lie 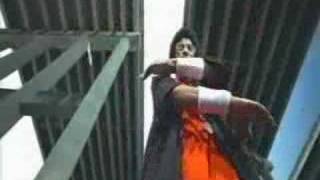