What Is Pornography? Lyrics

What Is Pornography?
Bill Hicks
The War The Sanctity Of Life The Wizards Have Landed Didn't Mean To Hurt You God Made Nasty Girls Bullies Of The World Goodbye You Lizard Scum Dinosaurs In The Bible Hooligans Chicks Dig Jerks
Official page Bill Hicks wiki What Is Pornography? video

What Is Pornography? Lyrics


That's the problem with this country, one of many, but this whole issue of sexuality and pornography, which I don't understand what pornography is. I really don't. To me, pornography's, you know, spending all your money and not educating the people of America, but instead spending it on weapons. That's pornographic to me. That's totally filthy. And et cetera, et cetera, down the line, you all in your f*ckin' hearts know the goddamn arguments. Okay.

But no one knows what pornography is. Supreme Court says pornography is any act that has no artistic merit and causes sexual thoughts. That's their definition, essentially.
No artistic merit, causes sexual thought. Hmm.
Sounds like eeeeeevery commercial on television, doesn't it?
You know, when I see those two twins on that Doublemint commercial... I'm not thinking of gum.
I am thinking of chewing, maybe that's the connection they're trying to make.

What?
You've all seen that Busch beer commercial, the girl in the short hot pants opens the beer bottle on her belt buckle, leaves it there, and it foams over her hand and over the bottle, and the voiceover goes "GET YOURSELF A BUUUUUUSCH."
Hmmm.
You know what that looks like? Nah, no way.

Now, I don't know the connection here... but goddamn if Coke isn't on my shopping list that way.
[singing] "Dr. Pepper..."
"Snickers satisfyin'..." [imitates the riff from "(I Can't Get No) Satisfaction"]
Damned if I'm not buying these products!
My teeth are rottin' out of my head, I'm glued to the television, I'm as big as a f*ckin' couch.
"More Snickers! More Coke!"

That's what I find ironic, too, is that people who are against these things that cause sexual thoughts are generally fundamentalist Christians... who also believe you should be fruitful and multiply.
Boy, they walk a tightrope every day, don't they?
[humming calliope music]
"How do we be fruitful and multiply and not think about it?"
"We could sing hymns during it!"
[singing] "One stroke at a tiiiiime, sweet Jesus
One stroke at a tiiiiiiiiime, sweet Lord"

I did that joke in Alabama, in Fyffe, and these three rednecks met me after the show.
"Hey, buddy! C'mere!
Mr. Funny Man! C'mere!
Hey, buddy, we're Christians. We don't like what you said."
I said, "Then forgive me!"

Later, when I was hangin' from the tree... 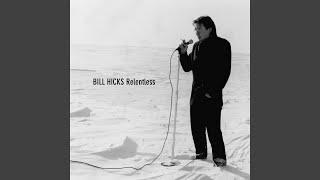 check amazon for What Is Pornography? mp3 download
these lyrics are submitted by itunes3
Record Label(s): 2006 Invasion Group Ltd Manufactured and marketed by Rykodisc, Inc under exclusive license
Official lyrics by