Dinosaurs In The Bible Lyrics

Dinosaurs In The Bible Lyrics


Another great thing about, uh...'bout uh, Bush being gone, it ends twelve years of fundamentalist Christians in the ******* White House. Thank you, God. Finally, my prayer got through. Was on hold with that prayer for about eight years with ******' Reagan. "God, help us...God, are you there? Surely, this is a really bad ******' joke, God. This B actor idiot ******' illiterate Bozo lookin' **** can't be the president of the country, can he, God? Not really. Reach your hands down from the clouds and pinch my butt. Make sure I'm not DREAMIN'!" Finally, my prayer got through.

..And Jesus and the disciples walked down the path towards Nazareth but, oh, the path was blocked by a giant brontosaurus with a splinter in his paw. And the disciples did run a-screamin', "What a big ******' lizard, Lord!" "I'm sure gonna mention this in my book", ..said Luke. "Well, I'm sure gonna mention it in my book", ..said Matthew. "I'm not sure what I saw", ...said Thomas. Timothy nudged him. "It was a big ******' lizard, Thomas!" But Jesus was unafraid. And he took the splinter from the brontosaurus' paw and the brontosaurus became his friend. And Jesus sent him to Scotland where he lived in a loch oh, so many years attracting fat American families with their fat ******' dollars to look for the Loch Ness Monster. And oh, the Scots did praise the Lord. Thank you, Lord. Thank you, Lord. 12,000 years old... I asked this guy- Come on, man. Dinosaur fossils. What's the deal? He goes, "God put those here to test our faith." I think God put you here to test my faith, dude. I think I've figured this out. That's what this guy said. Does it bother anyone here- the idea that God might be ******' with our heads? Anyone have trouble sleepin' restfully with that thought in their head? God's runnin' around, buryin' fossils. "Oh, ho, ho! We'll see who believes in me now! Oh, ho, ho. I'm a prankster God! I am killing me, oh, ho, ho!" You die, you go to Saint Peter- "Did you believe in dinosaurs?" "Well, yeah. There was fossils everywhere!" BOOM! AAAHHH! "What are you, an idiot? God was ******' with you! Giant flyin' lizards! You moron! That's one of God's easiest jokes!" "It seemed so plausible! AAAGHHH!" Bound for the lake of fire.

Y'ever notice that people who believe in Creationism look really unevolved? Eyes real close together. Big furry hands and feet. "I believe God created me in one day." "Looks like he rushed it." Now we have women priests. What do y'all think of that? Women priests. I think it's fine, women priests, y'know. Now we got priests of both sexes I don't listen to. ****, I don't care. have one with three balls and eight *******. I don't ******' care. Have a hermaphrodite one. I don't care! Have one with gills and a trunk. I might go to that service. (elephant noises) I don't give a ****, okay? While I appreciate your quaint traditions, superstitions, y'know. I, on the other hand, am an evolved being who deals solely with the source of light which exists in all of us in our own minds. No middleman required. Ahh-hahahahaha. But anyway, I appreciate your little games and **** puttin' on a tie, goin' to church. Ya-dadadada 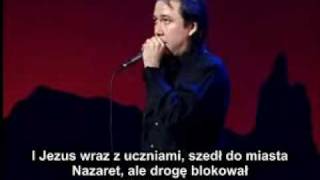 check amazon for Dinosaurs In The Bible mp3 download
these lyrics are submitted by kaan
browse other artists under B:B2B3B4B5B6B7B8B9B10B11B12
Record Label(s): 2006 Arizona Bay Production Company Manufactured and marketed by Rykodisc, Inc under exclusive license
Official lyrics by