Sometimes, hungover, he might lose a pop fly in the glare of the Washington sun.
And yes, he swung at bad pitches, and let the Irish in him sharpen up and boozy-bloat his tongue.
Nights on the road he led a bachelor’s life, with the bright short blaze of a shooting star.
But he soaked some homers—yeah, four in one game--when the ball was dead and the fences far.

In July 1903 he was hitting .333; for him that was a little bit under par.
On the 2nd he jumped the team and jumped a train from Detroit to New York, went straight for the dining car.
He was boozing it up good, they say, making trouble, cursing, shouting, Delahanting in the bar. At Fort Erie, Ontario, he was bumped from the train, wandered out on the international bridge but he didn’t get too far.

The night watchman said he’d seen a man, ended up wearing his bowler hat; he heard a splash but he didn’t see him fall.
For a week no one found a clue of him.
What good’s it do to question death when it makes a bad call?
But I don’t think he killed himself. I think some strange notion drew him to Niagara Falls,
across the curve of day and night, like the perfect arch of a high fly ball. 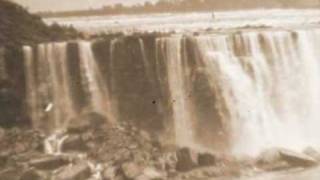