Cinco De Mayo
War
Spill The Wine You're No Stranger L.a. Sunshine Gypsy Man Don't Let No One Get You Down Galaxy All Day Music In Mazatlan So Why Can't We Be Friends
Cinco De Mayo video War twitter


I met a little Spanish girl on the fifth of May
A pretty senorita, get down, she lived in east L.A.
Down in 155, the party's alive, there was magic in the air
Feet were flapping, pumping and tapping, dancing everywhere
And the people say,

Home boy down the street in his low riding limousine
It's the funkiest thing on wheels that I've ever seen
So we jumped inside, took a ride, the guys from the neighborhood
Slipped downtown where the people get down, and it made me feel so good Everybody sang,

From the park we heard the music, there were people all around
Some were singing, some were dancing, we could boogie down
Everybody on the street was jammin' and the band was going strong
So we drank a little wine, we had a good time, and we partied all night long

And the people sang, 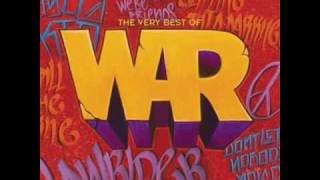