[Verse 1:]
Ain't a goddamn thing gonna change, I'm still the same Vinnie
I'm still the same fat motherf*cker, same guinea
A little bit more money, that's why I ain't skinny
Still the same block-hugger, still the same city
I still got the same people that remain with me
That was drinking 40s with me when they slain Biggie
And the same motherf*ckers felt the pain with me
When my stepfather died and they came with me
I ain't expect nothing less from them, they chained to me
Spiritually, mentally, we the same really
We all was raised on different blocks in the same Philly
Still some stupid motherf*ckers saying they can't feel me
Actually they do feel me, they just ashamed really
That they ain't shining like the kid, a bunch of lames really
Dirtbags trying to make the kid insane really
But Louie Dogs just impervious to pain really

[Verse 2:]
It ain't anybody ever gonna hold me down
I'm one of the greatest ever homie I stole the crown
I'm too strong and fast, you ain't slowing me down
I'm gonna keep beating your head, call me Homie the Clown
I hope that y'all are holding close to your rosaries now I think I got a couple snitches that's close to me now
If I was them I'd keep it moving be ghost from me now
And pray that they don't run into Vinnie socially now
It's always one motherf*cker trying to set you up
Dry snitch take something from you, wet you up
I was sleeping being dumb trying to protect the f*ck
He getting buck fifty, slice him from his neck to gut
All in all ain't nothing changed, still the same squad
Some are still hustling, summers at the same job
Some is 9 to 5, some is on the graveyard
I'd rather have them on tour with me so I pray hard

[Verse 3:]
I'm the truth motherf*cker, not built to betray
With the philosophy that Rome wasn't built in a day
No matter how strong the body it wilts and decay
After it's hit by a shotty that's silver and grey
I'm a mess, bipolar, I'm willing to say
That there ain't a woman that's living that's willing to stay
Somebody please fix my head, I'm willing to pay
I'm too at ease with the dead and the killing okay
Damn, I'm anti-social I'd rather be home
And when I'm drunk Planet and Crypt carry me home
I don't have a happy ending, just tragedy homes
You better address me as mister or majesty homes
I'm a messiah, I'm a liar, I have to be stoned
I'm a pariah, I retire, I have to be cloned
I have fire, I'm desire, this has to be known
I'm a survivor, a relier on tragedy's throne 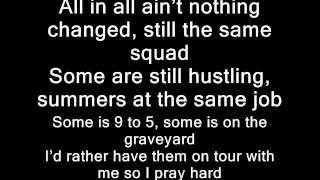