Now you know this not some sunburst drink's
I'm so deaf then the def. comedy jam
Open that clip, now clip up like I'm firm
I'm a super duper rap rapper
Steady makin' snappers
Hand's clapper, nigga my chopper got'cha
I'm on the first floor emergency
Bury me, mister I'm sick, I'm jump for joy
But quickly, in my disguise to finish the j-o-b
Ya see, I'm back on track, can ya get with that?
No, you's a hoe, you's a hoe mystikal!
I pack ya up like there's nothin' to be
Down like a street, steady re-loadin' my weapon
Like a brass knuckle, and my soldiers I mean shoes
I mentally retaliate, ya think ya slick
You not gonna bounce, you not gonna bow
Hoe you on my dick, but umm
I like the way you scream yelllla!
'cause, you be sweatin' so hard you need three or four towels
I tried to shoot you in yo head, I wanted to see some
Bloody bread, somebody in the crowd said
Girl, that boy dead f*ck him!
He was a cheerleader anyway
You could never play it off hoe, you was really gay
'cause you could break yo self but you can't break me
'cause I'm a real f*ckin' lyricst with u.n.l.v.
With the flow umm, flower, you know what
>from the floor up, with the dirt rapper
I'm the dirty rap master, I'm comin' to chop ya!
With my knock you out style, that I practice
Like gymnastics', I'm a fantastic static phonetic
I'm out the attic, with the all black jacket
Bringin' much racket, snatch ya fagot
Worse then that standin' there I say
Hoe stop playin' with me!
'cause

How could bitches f*ck with
Million dollar nigga's how ya figure? It's all good for you to stroll through my hood
V.l. throw suspicious rock's at yo shit and
If they had k's they spray and leave you
Dead as a bitch! what type of nigga want's
To walk around here in braid's
What happened to the chuck's, levi's and the fad's
Swish blade in my pocket, when I see ya I'm a cut yo hair
No matter where, it's ugly you don't want to see
The capital y-a get into yo shit nigga dick sucker!
Whoa flippin' motherf*cker michael jackson pretendin'
You read for vision go suck a dick nigga
Reach around the whole third hit that ass
Picture me and you in a two man cell
You washin' nigga's draw's takin' my
Dick leanin' on the wall now mystikal you bitch you
Remember when you said you wasn't gonna bow
You disrespected the "u"

Criminal minded you been defined
As the fakest motherf*cker in the down south area
I think your goin' through a phaze
What made ya, turn around and talk shit
Your rhymes and you personally doesn't fit
Now wait a minute, remember that time
You got on soul train
You got the chance, and didn't even represent man
You faked the funk, actin' like a straight punk
Check it out, they thought you was like us
The motherf*cker siked up
Turned around, had a f*ckin' glitter glove
Now, can you tell me what the nigga here
Was thinkin' of?
I'm here to stop you in yo track's
The shit you do, be wack I'm fat
Shit's spittin' I done all ready stacked
Tellin' me that the nation wide
But you know, that I know,
You don't want the whole nation to know
You's a hoe! f*ck the piece treaty
You started this, where's my all black clothes and
My all black beanie, I play it pinnately style
Leavin' ya gutless, leavin' ya buttless
We put together the bomb alarm
Half this shit you can't touch this,
You best's to stick to jumpin' around
Have the area first down, 'cause I'm the hound and
You the clown, now wipe the sweet from my neck
'cause you ain't nothin' but a bitch 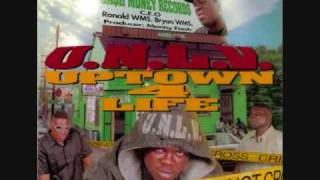