Okay, the GZA
Tony Touch classic, knowhatI'msayin'?
We gonna bang y'all in the head one time
Blaze up on y'all one time real fast
(Do the mix and all that shit)
Knamsayin', word up
(Make it, make it a record real quick, do yo' thang)
Throw ya seatbelts on, ahhight?
(Yeah, hook it up, make it a record, get down, yo)

I take y'all niggas straight, beneath the surface
To the core, if it ain't raw it's worthless
Pentab professional, hold the ink
While river rats fall off the raft and sink
Tony let a brother touch, twenty bar rush
The way we push through equivalent to rocket thrust

Allah just, I lay it for the mix tapes
Quick to quake a label-mate
The sound came outta rusted crate
Surrounded by cobwebs
Beat smooth enough to slide through like bobsleds
On a cold white snow, plus with the right flow
Wu-Tang niggaz, they shine and make the mic glow

We killin' all gorillin' with all that screwfacin'
Pacin' back and forth looking savage, stop it

Whether plugged in or plugged out
Iron drill mugged or thugged out
Blood in or blood out, son was bugged out
Might look at you and slice you
Buck fifty face stupid and say but run Nike swoop
Who the f*ck you think, let y'all wild niggas in
Allowed you to put down ya guns and raise ya pen
Ruler Zig-Zag-Zig, we don't f*ck with no pig

We teach the kids, you rather have a bullet or a word to your wig
Murder rates increases, bullet holes the size of fifty cent pieces
Don't worry about the weed or p*ssy, I read books
I'm liable to mate'cha king with three rooks
You see the Wu W raised in black fists
Maybe Tony Touch, Concord needle will scratch this
The ice cube link you bought, from the Jew for 80 G's

Was only appraised at forty-two
Gazed upon by the eyes of multitude
Of people, who would trade gold for food
I heard boar's head killed more than nuclear's warhead Or street serfs who walk around dressed in all red
Bobby Digi said if you ever in Compton or Long Beach
Break my sons Doc Doom and Crisis wit' a nice piece

Off top my unorthodox style of attack
Is like Hannibal rollin' on elephant's backs
Pack a long barrel, bustin' off strong ammo
My light so vast, I cast twenty foot shadows
First family, fifth cappo, micro to macro
Load it in ya head, play it back slow

Act like you know, this is no drill
Murderous rap revealed goin' for kill
On these New York city sidewalks we walk
Camoflauge, dodgin' the eyes of the hawk
Kani Sport, totin' the fifth, slidin' off
My live source movin' across with brute force
Bloodsport, anymore heads face the blade
Fakers must fade, the stakes are now raised

Words of murder, suspense, and intrigue
Make major league niggaz show signs of fatigue
My Killer Bees span wider than seven seas
Squeeze on MC's, with bullet train speed
Tony's Touch create more gold than Midas
Ya highness, all in ya head, like ya hair stylus

Frosty mug, big ring leaders top secret thug
Lampin' in cheaters Orenthal with the murder glove
Boat of the town, devilish grin look peculiar
Swung on this faggot, knocked the windows outta Silvia's
Timb's got scuffed up, my ankles got sprained, that's my word
To ever single seat, I smack flames
Staten Island's bayside of teachers of Elijah

Thrown out the temple, non-calodic wit the father
Nickname's Pudding, Clarence 13X before the Will Smith's
And the limelights of Cuba Gooding
Lost in the cosmos, explodin' through a quasar
Be duckin' pulsars, organic stay still be the Gods
Tony Touch, Tony Touch, word up
Big Face Ghost in effect
Explain lyrics
Correct lyrics 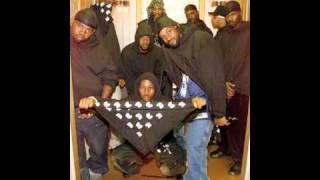