Hey yo, I be the man dangle, handle bilingual
Shit's so hot, it might be the first single
Soft mack sprinklin' salt on my Pringle
Ain't no stoppin' me now, I'm gon' jungle

NI, flippin' shit, freakin' shit
Runnin' shit from channel to channel
I ain't gon' bite off more than I can handle
I got the DVD all in my wall panel

I ain't try to brag, this is on my dick, 'cuz they see in a mag
Should of drived a Benz or I should of drived the Jag
Old school nigga, I rock the doo rag
I might f*ck around and let my pants sag

One two, I come through wit my families
Big Psych, pit fight, you know the deals
Potted, take a good look at what we started
Retarded, that Brooklyn bullshit we got it

Everybody already know Toca be 'bout it
And me gettin' knocked out the box, kid, I doubt it
It's crowded, up in the club, so I'm ma rub
My pinga against the ninga to show love

Stuck in the cut, as always I come wit the ruck
Tony Touch, Beatnuts, straight f*ckin' it up
Now don't sleep home boy, I got it tucked in the gut
Just in 'cause I gotta flex against one of you ducks

Mira drago, Mr. El Cavallo
I send y'all free like Cinque De Mayo
Claro, come on y'all, get wit the vibe
And follow, and pump this cassette in the ride Aiyo, Nills where's you man wit the Jeckyl and Hyde?
Let's get this jump-off jumpin', flip the record and slide

And, everybody was drinkin' and niggas don't be thinkin'
Aiyo, Psych is chillin', flippin' the hottest hits in the club drinkin'
Never trickin' on a pigeon, yo who I'm bringin'
The glock is hittin', but it's reachable by hand
I'm ma beat you wit this, 'til you can't understand

And I don't give a f*ck if you don't know who I am
This is that pimp song, so take your minks off
And wild out for the night and get your drinks on
Mami, the way you rock me on the dance floor

Got me, ready to take my f*ckin' pants off
Blast off into a new dimension
Here's a little somethin' I'd like to mention
If you ain't lovin' it, you must be a hater
If shorty ain't f*ckin', see you later

Hasta la vista, you full of pasta and pizza
Oh, you gangster, I'm ma get mobster and beat ya
Now tell me who the best there is
Greg NI, Tony Touch, Psycho Les, there it is 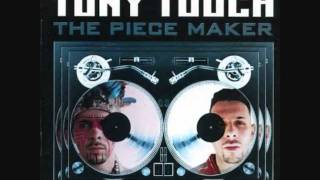