Lobachevsky
Tom Lehrer
Whatever Became Of Hubert I Wanna Go Back To Dixie I Hold Your Hand In Mine I Got It From Agnes George Murphy Fight Fiercely, Harvard! Everybody Eat Clementine Bright College Days Be Prepared
Tom Lehrer wiki Lobachevsky video Tom Lehrer twitter


For many years now, mr. danny kaye, who has been my particular idol since childbirth, has been doing a routine about the great russian director stanislavsky and the secret of success in the acti
Ofession. and I thought it would be interesting to stea... to adapt this idea to the field of mathematics. I always like to make explicit the fact that before I went off not too long ago to figh
The trenches, I was a mathematician by profession. I don't like people to get the idea that I have to do this for a living. I mean, it isn't as though I had to do this, you know, I could be maki
H, 3000 dollars a year just teaching.

Be that as it may, some of you may have had occasion to run into mathematicians and to wonder therefore how they got that way, and here, in partial explanation perhaps, is the story of the great
Ian mathematician nicolai ivanovich lobachevsky.

Who made me the genius I am today,
The mathematician that others all quote,
Who's the professor that made me that way?
The greatest that ever got chalk on his coat.

I am never forget the day I first meet the great lobachevsky.
In one word he told me secret of success in mathematics:
Plagiarize!

I am never forget the day I am given first original paper To write. it was on analytic and algebraic topology of
Locally euclidean parameterization of infinitely differentiable
Riemannian manifold.
Bozhe moi!
This I know from nothing.
But I think of great lobachevsky and get idea - ahah!

And then I write
By morning, night,
And afternoon,
And pretty soon
My name in dnepropetrovsk is cursed,
When he finds out I publish first!

I am never forget the day my first book is published.
Every chapter I stole from somewhere else.
Index I copy from old vladivostok telephone directory.
This book was sensational!
Pravda - well, pravda - pravda said: (russian double-talk)
It stinks.
But izvestia! izvestia said: (russian double-talk)
It stinks.
Metro-goldwyn-moskva buys movie rights for six million rubles,
Changing title to 'the eternal triangle',
With brigitte bardot playing part of hypotenuse. 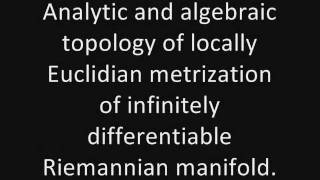