Introduction
Tom Lehrer
Whatever Became Of Hubert I Wanna Go Back To Dixie I Hold Your Hand In Mine I Got It From Agnes George Murphy Fight Fiercely, Harvard! Everybody Eat Clementine Bright College Days Be Prepared
Tom Lehrer wiki Introduction video Tom Lehrer twitter


Announcer: I should like to introduce now the featured
artist of this evening's...ordeal. I'm sure that you
will all agree without any hesitation that Tom Lehrer
is the most brilliant creative genius that America has
produced in almost 200 years, so perhaps a few words of
biographical background might not be amiss. Endowed by
nature with perhaps the most glorious baritone voice to
be heard on an American stage since the memorable
concert debut in 1835 of Millard Fillmore; endowed also
with twelve incredibly agile fingers; Mr. Lehrer has
had a long and varied career in the field of
entertainment starting with nine years at Harvard
University...where it was that he first decided to
devote his life to what has since become a rather
successful scientific project - namely, the attempt to
prolong adolescence beyond all previous limits.

Even before he came to Harvard, however, he was well
known in academic circles for his masterly translation
into Latin of The Wizard of Oz*, which remains even
today the standard Latin version of that work. A few
years ago he was inducted...forcibly...into the United States Army and spent most of his indenture in
Washington as sort of Army liaison to the Office of
Naval Contemplation. About his service record he is
justifiably... modest, but it is known that in a short
time he rose to the rank of brigadier general. However,
before he could acquire a tenure, he was discharged,
and owing to nepotism and intrigue, he emerged with
only the rank of Specialist 3rd Class, which was
roughly equivalent to the rank of Corporal without
Portfolio.

But to return to his career in show business: for
several years he toured vaudeville theaters with an act
consisting of impressions of people in the last throes
of various diseases. I'm sure that many of you here
tonight still recall with pleasure his memorable
diphtheria imitation. He is generally acknowledged to
be the dean of living American composers, and is
currently working on a musical comedy based on the life
of Adolph Hitler**. Without further ado - Tom Lehrer...

(The Announcer sits down at the piano, revealing
himself to be Tom)

You'd be amazed at the money we save that way. 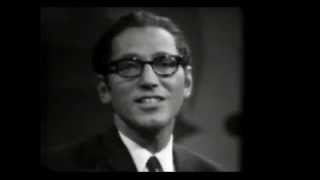