In the beginning, man wondered to himself:
Why, oh why are we here?
And yet, with each asking of this question
The answer would become even less clear
Overwhelmed by fear, distraction took it's place
And so it was, in the world's first shelter
That we began the human race
The human race to fill up more and more empty space
Oh, how we loved, the human race

Until one day this one guy said to this other guy, he said:
Hey, have you seen that guy over there?
He's got more than everybody else has got
To me, that don't seem fair
Well, the second guy agreed with the first guy
Everybody else did too
Til they all got so worked up, they figured
There was something they just had to do:
Divide his things up among each other
After they killed him of course
They could see no real good reason not to just
Take what they wanted by force
When they found him he said:
Hey, wait a minute fellas, I wouldn't kill me just now
You can see that I've got more than any of you
Have ever got, wouldn't you first at least like to know how?
And with that, he had their attention
And with that, he went on loud and clear, he said:
You all know how long we've all wondered
Why, oh why are we here?
Well today I'm gonna tell ya all about it I'm gonna teach ya about sufferin' and bliss
I'm gonna teach y'all a little bout Heaven and Hell
And the God that gave me all this
God gave me this because I'm humble
And he can do the same for you too
But if you're seekin' his love and affection
What you're doin' is the last thing I'd do
He sends killers to hellfire, both here and eternally
The good live forever in a place called Heaven
God told me this personally

Who you gonna trust if you can't trust me?

So unless you want suffering and heartache
Unless you want trouble and fear
You better find some kinda way to humble yourself
May I suggest helpin' me clean up around here?
'Course I could pay ya a little bit a money
But more importantly God would see
And if He sees you workin' humbly
Some day he may give you what he's given me

Well the crowd just didn't know what to do with that
Nor could they prove what he said wasn't true
And since he had what everyone else thought they wanted
It seemed like the thing to do
And with that we rolled into the future
And ain't it a son of a bitch
To think that we would still need religion
To keep the poor from killin' the rich?

Who are you gonna trust if you don't trust me? 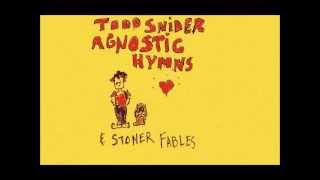 check amazon for In The Beginning mp3 download
these lyrics are submitted by BURKUL4
browse other artists under T:T2T3T4T5T6T7
Songwriter(s): todd snider
Record Label(s): 2012 Aimless Records
Official lyrics by