Some People Have It Worse Than I Lyrics

Some People Have It Worse Than I Lyrics


Well I wake up in the morning at 11:47 and I can’t
believe I have to face the horror of another f*cking
day

My life is pretty sad
But I know that I should be glad.
At least I’m not a starving Ethiope
Or a policeman in Bagdad

At 11:53 I instigate the day’s ablutions in the hope my
constitution can be altered by some action on the bowl

By 11:59 I have decided that my life would be
immediately improved by a carefully written list of
short-term goals

But by 12.05 my list consists of 1-dot put some pants
on, 2-dot go to the shop, buy some prunes and Panadol

Yeah how bad can it be?
Some people have it worse than me
I could be a child prostitute
Or Gary Glitter’s family

At 12:30 I realise I’m feeling so dejected that I’ve totally neglected the beginning of the Jerry Springer
show

But how bad can it be?
Some people have it worse than me
I could be a Jewish stand up comedian
In Nazi Germany 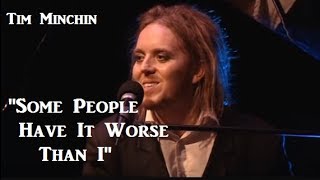 check amazon for Some People Have It Worse Than I mp3 download
these lyrics are submitted by kaan
browse other artists under T:T2T3T4
Songwriter(s): Timothy Minchin
Publisher(s): Navel Enterprises Pty Ltd.
Record Label(s): 2013 Tim Minchin
Official lyrics by