I don't think.. I think I repress a lot of stuff
like, not just my anxiety and stuff
but my anger and things... Like...
I- I'm really non-confrontational
So I tend not to tell people when I'm feeling cross
with them and whatever, and I think surely... I suffer
because I don't wanna... hurt other peoples feelings or
something.

I went and saw a psychologist recently and talked to
him about this, and he agreed that I need to find a way
to express myself more... you know, when I feel angry
with people.

So what he said I should do was write my feelings down.
That way.. expressing myself without confrontation.

So I've done that, I've written some of my feelings
down in a poem. I think it might help if I could do it
for you guys.

I breast-fed until I was 9.
Which my ...QUACK... Doctor, says is fine.
And he also thinks I'd deal with anger better
if I wrote about myself in a poem or a letter.

My mother was a ...REAL f*ckING BITCH... caring lady.
She taught me all I know.
Although i was a little slow,
she never gave up,
she never let me ...SLAP... down.
Although she spent a lot of time
at the neighbours house when my dad was out of town.

I didn't walk 'til I was 7,
or talk 'til I was 10.
But neither did Napolean,
according to my ...QUACK f*ckING... doctor.
Who has certificates in frames
to substantiate his ..DODGY f*ckING... claims.

My father left my mother, for the love of a ...POONTANG... nother.
And I have a ...BASTARD... brother
who I've never really known.
Because m'dad moved out to colac
BULLSHIT YOU FAT CUNT... telephone.

In primary school I had trouble making ...ASHTRAYS...
friends.
An issue which has become somewhat of a trend.
The origin of which I cannot pretend
has not perplexed me.
Although my ...QUACK, f*ckING... doctor says it's cool
and that loads of ...FAT FREAKS... f*ck YOU!... kids at
school
have problems with communication.
And that a course of medication
would be wise,
And combined with more honest self-expression,
could help me with my issues with emotional repression.
And at 90 bucks a session,
I think I'll take the ...THIEVING, QUACK, BASTARD...
lovely chaps advice.

And I feel that all this writing is really ...POOFY...
exciting,
and my ...QUACK, DOC, QUACK, f*ckING... Doctor would be
proud.
Because I feel a lot less angry,
and I'm saying stuff out loud,
and I'm letting anger out.

Like today in our last session;
when I taught the ...QUACK... cunt a lesson.
'cuz he said I'm not progessing,
said I wasn't moving forward.
So I said, "well let's see how you move without your
f*cking legs."

And I tied him to his chair,
and I pulled out my machete.
And I listened to him beg,
And then I cut his f*cking feet off.
And while he lay there bleeding,
I used his feet...
to kick him in the head. 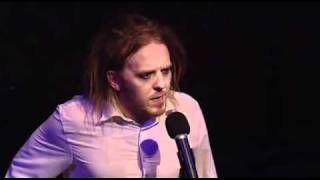