[Tela]
Hey J, I love you, and the hustle
For puttin' down the way so the South don't struggle
Now niggas wanna play, like they forgot the muscle
That paid the way for them to pick you up and touch you
Don't play, you know them bitches wasn't f*ckin' with us
Segagrated us, called us country as f*ck
Nigga swallow it up, you can follow it up
Started small time, dope game, started it up
So what these niggas made a couple of grand
A couple of fans, now niggas wanna bite at the hand
You think that we playin' y'all niggas ain't trill with shit
You need to grab on yo nuts, and remember the shit
That made ya get crunk, get buck, tear da club up
Throw shit, shoot shit, bloom shit, then duck
Some niggas wanna see 'em die, I just kiss 'em and cry and
Keep a Pistol close by Rap-A-Lot

[Lo-Key]
Uhh , uhh , uhh Yes sir
It's a dirty world, but it ain't enuff
They wonder why me and them boy's be cuttin' up
They wonder why we been in this thing for ten tight
I spit the realist game ya ever hear in yo life
I put that on the Lot, my block, my ice
My wife be on lock, and my pocket be grey twice
I'ma double up nice, when i drop it like dice Watch me come up in the game like a thief in the night
Got hoes like Whoa!, where them niggas come from?
I'ma Ace-Double-O De Don, I get it done nigga what huh
What y'all know about that?
What y'all know bout them boys who put the Dirty on the map?
Somebody dead wrong, they should have told y'all bout them cats
Now we got to act bed, and take the whole world back
Niggas can't stop that, be ready to ride
It's the L-O-K-E-Y and I want the whole pie

[ScarFace]
Yo, yo old man check it out
He been hustle {???}, the game par-locked
Rap-A-Lot run block, so brother hood don't stop
If ya scared call Cops, they don't want none
See all we fearin' is God, the morgue don't run
We done came a long way, from the Rhine Stone days
Livin' from Pillar to Post, livin' next door to J
I remember the struggle, J inbeded the hustle
Picked us off the street and out of trouble
I ain't never said this in public before nigga
But I love you and he who ever crosses the Prince,
Will feel a muscle, I know you niggas say you not Shaq at this label
But without Phil Jackson, I just be another player, and not MVP
Yo to my nigga J, that's it, The World Ain't Enuff for Rap-A-Lot 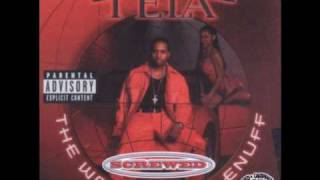 check amazon for The World Ain't Enuff mp3 download
these lyrics are submitted by kaan
browse other artists under T:T2T3T4
Record Label(s): 2005 Rap A Lot
Official lyrics by