The sky turned to black
I reached for a near shelter,
a gloomy house where an old host
was keeping a grim tale

He told me about the girl
who stole the soul of his son, she led the house
to ruin and pain and still she haunt that place:

"Do you want to see the: thing upstairs?"
was the old man daring me?
"Stare at her portrait and she will come back to life"
and the painting started to move:
again: and again: and again
As I saw her image I understood
the truth was more than meets the eye
She incarnated the ancient ones
that should not exist
the unholy Necronomicon's forgotten breed
Possessed by fear I found my hand wielding the gun
shooting with frantic speed
'till the painting was destroyed
I ran away from that place and later on the road
a farmer told me that that house
was burnt six years ago 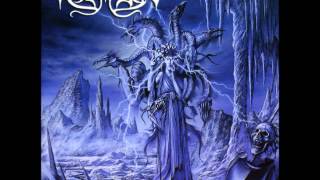