[Verse One: Sir Mix-A-Lot]
I was raised in the S-E-A-double T-L-E
Seattle, born in the C.D. nigga
19th and yes LeBorda(?) pimpin was hard
Caddillac was the car I wanted
And I got that seven-seven Coupe with the trues and straps
I couldn't roll no hubcaps, huh, it wasn't easy
Tryin to compete, with my homies in the C.D.
Here's my plan, funky-ass sedan
Laid down with the vogues, money in my hand
Hair all whipped up
Carload full of freaks with the butts
I used to cruise around Seward Park
Flip the funky eighty-one, and La Vista
Lookin for freaks to be G'd
Most mini-skirts wanted please
In them days boy you had to be pimpin
Just to keep motherf*ckers from trippin
Now punks wanna run up pokin
With a nine double-M, is you jokin?
Cause I'm packin - a HK-91 son
308's is what I run
A lot of clowns tried to take this town but they didn't
Huh, cause Seattle wasn't bullshittin

[Interlude: Attitude]
It ain't nothin but the real up in the Northwest (real deal nigga)
So don't step to the 2-oh-6 tryin to kick up dust
Or you might get floored, sucka (get f*ckED UP), think about it
This is from the Attitude Adjustor

[Verse Two: Sir Mix-A-Lot]
Do we got gangs? Hell yeah, brothers gotta get paid
Mickey D's ain't payin no way
So they take to the streets with gats
And they'll put 'em on ya just like that
So I'm undercover, when I'm rollin through the C.D.
A lot of niggaz wanna get me
I see a freak in front of Garfield, I swoop around the block
Gang of niggaz yellin out, "f*ck Mix-A-Lot!"
Do I hate 'em? Naw, I gotta love 'em
They think my head is big, and I'm tryin to be above 'em
Huh, but to the masses I'm just another coon
Gettin paid for a little bit of boon
So even though a lot of niggaz talk shit
I'm still down for the Northwest when I hit
the stage, anywhere U.S.A.
I give Seattle and Tacoma much play
So here's a shot to the Criminal Nation
And the young brother Kid Sensation
I can't forget Maharaji and the Attitude Adjustor
And the hardcore brothers to the West of Seattle
Yeah, Westside
High Pointe, dippin fo'-do' rides
And my homeboy Critical Mass in the back
With the bat to smack back all packs who try to jack me Just because I'm in a S-E-C
Droptop A-M-G
The cops say Mix-A-Lot's a dope dealer
But I'm more like a dope deal sealer
I sell rap deals, not drug deals
Handin out contracts like meals
The Rhyme Cartel, I own the motherf*ckin label
And Ricardo got the papers on the table
And I'm signin 'em, just like that
No sluts so my pockets stay fat
A lot of clowns tried to take this town but they didn't
Huh, cause Seattle wasn't bullshittin

[Verse Three: Sir Mix-A-Lot]
Let's take a trip to the South end, we go West
Hit Reinert Ave and bust left
I'm in a funky-ass Porsche Gambala
No bitches, just women on my collar
S-E-A-T-O-W-N
Yo' nigga is back again
Huh, who you callin sellout fool?
I was puttin caps in clowns when you was still in school
But I choose not to talk about that
So many gangsta crews now, I'd rather kick back
So I drop my own style
f*ck bitin somebody else, and jumpin on a pile
But that's another subject, gettin back to the hood
Me and my boys is up to no good
A big line of cars, rollin DEEP through the South end
Made a left on Henderson
Clowns talkin shit in the Southshore parkin lot
Critical Mass is beggin to box
But we keep on goin because down the streets
A bunch of freaks in front of Reinert Beach, was lookin at US
They missed that bus, and they figured that they could trust us
Six cars in a line and the girls was fine
I had "The Wicked One" playin on my Alpine
Two Porsches, two Benzes, a Ferrari Testarossa
And a Rolls Royce roaster
Miami Vice tried to get with this, but they didn't
Huh-huh, cause Seattle ain't bullshittin 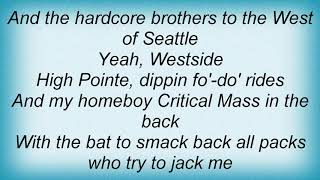