WHAT'S WRONG, SWEETHEART?
DON'T YOU WANT ME?
YOU PAID FOR ME. KNEEL TO ME.
*rhythmic sniffing*
SMOKE ME. BREATHE ME. INHALE ...
HA HA HA HA HA HA, I'M YOUR NEW GOD.

(Sir Mix-a-Lot)
She's only 16, she looks lost
Bought crack from the dopeman, and got tossed
Livin on the streets, smoked out
Perfect individual for me to bust out
You can sniff me, or you can puff me
But the girl shoulda known, you can't trust me
She's only 98 pounds and lonely
She calls to her God for help, and that's me
COCAINE, go ahead n' use me, heh heh
Momma won't know you're a junkie
Just put me in your pipe, light and SUCK
*deep inhale* Cluck cluck cluck!
And while you're high, grab a 12 gauge
Jump back on the streets, in a crack rage
The only way out is the sucicide route
Put the gauge at your dome and TAKE IT OUT
Now I'm on the 6 o'clock news
All my movies get the rave reviews
60 Minutes had a special on me
The god called Crack is killin your society
Colombia is where I get picked
I can kill with a 90-10 split
I work through the week, my pleasure is pain
And I'm your new God
You can call me Cocaine

(Sir Mix-a-Lot)
Brothers throwin up a set to protect me
I'm worth a lot so money so respect me
Doin damage on the boulevard, just like that
*gunfire* Shoot 'em over crack
Dope dealers would kill for me
Cause if ya sell me, I help ya live lovely
You want a Porsche? Move a few ki's
Just remember that your God is me
The task force bum rushed one of my employees A big score, 23 ki's
Now ya see another dopeman sink
And one young cop on the brink
The cop's thinkin bout pinchin
And alimony checks to his wife for the rent and
Kids, so the profit is slow
And he wants to make his bankroll grow
23 ki's just sittin in the back seat
I can make the best man weak
So the cop hits the streets to sell a little pain
Now the cop has a God
You can call me Cocaine

(Sir Mix-a-Lot)
The only way I can be stopped is with intelligence
And you don't get it, so that's irrelevant
So you die, or else go to jail
And I'm happy as hell
I tried to get a young kid but he just said no
Because of some sports hero
So I entered the hero's house in the form of a line
And let him snort one time
Now he'd dead, cause my dose was pure
Got him too quick for the cure
So the headlines read, "Dope Made Another Hit"
*sniff* Dead on the first sniff
Now the kid is lookin for another hero
I let him know the other fool was a zero
He hits the streets, lookin for a remedy
They introduce him to me
I don't need another junky, just a flunky
Besides, the little punk was spunky
So I put him in a fresh pair o' Dickies
Give him a beeper, and let him terrorize the city
Put him in a gang, teach him to slang
Another young punk deep in the game
He'll be lucky if he lives til' 18
And I'm his new God
You can call me Cocaine 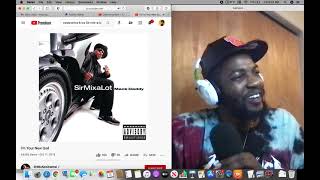