Part Of The Plan Lyrics

Part Of The Plan Lyrics

[Verse]
It was all part of the plan
Now these bitches know who I am
I remember I was stuck on the block selling grams
Young Julo keep exposing my hand
Brand new FN, that bitch don't jam
Trap house too hot, think I need me a fan
I ain't get it off the bitch, yeah, I got it off the land
All these drums that I got, might start me a band
Yeah, I smoking on the opp, that's a brand new strand
You niggas don't want problems, you niggas are weak
Lil bro at the trap selling bricks where I sleep
I got Givenchy my tee and Balenci my feet
It don't matter where I'm at, I got sticks in my reach
Bro, niggas talking money, they don't practicе what they preach
Had to cut a nigga off, he was acting likе a leech
I'm on the Interstate right now, packs in the Jeep
My neck colder than a bitch, but I'm packing that heat
Niggas don't want no smoke, don't want no war
I send a stick to that dirty ass nigga to your door
I'm so high off the drank, I don't want no more
If we talking bout' guns, yeah, I got a whole store
I done sold too many bricks, I deserve an award
See an opp person, he gon' stare at the floor I'm in the Maybach Benz, I don't drive no Ford
It don't matter where I'm at, I'll slide on tour
Got drank in the cabinet, pounds in the drawer
Don't call my phone if you ain't tryna rescore
Nigga bet not play, we don't play no games
Yeah, walkdown gang, we'll hit a nigga close range
Nigga begging for a front, he ain't got no stain
Man, this chain round' my neck, worth a brick of cocaine
If the laws pick you up, don't say no names
I was in it for the money, I ain't want no fame
Every you niggas slid you ain't hit shit, huh, I guess you niggas got no aim
Opp nigga got on a vest, but I'm aiming for the head
Bow, shit, there go your brain
And I'm married to the money, but I ain't got no rang
But if you look at my neck, got 3 or 4 chains
I'm rocking Louis Vuitton while I'm hitting a set
It just the other day when I got outta jail
50k for my lawyers, spent 100k on the bail
If you was in my shoes, you would fold, you would tell
Niggas hating on the net, but I really don't care
All this ice on my neck, can't help but stare
[Outro]
Ha, look, yeh, yeh
Man f*ck that shit
Explain lyrics
Correct lyrics 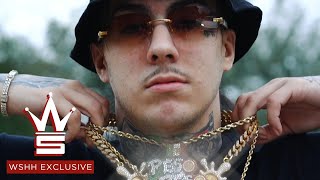