The views expressed on this track are not directly those of lowkey or logic, we're just drawing attention to the lifestyles that some people lead

Lowkey: I was born in Birmancy, one of the south parts

Logic: And I was born in Bazara, southside of Iraq

Lowkey: We used to play football outside in the park

Logic: We used to dodge bullets outside in the dark

Lowkey: I never prayed, I was told there isn't a god

Logic: I prayed 5 times a day its like I lived in a mosque

Lowkey: Me, I'm easy with a pint and some cricket to watch

Logic: They sanctioned everything we got, so now it isn't a lot

Lowkey: My mum and dad worked hard, always had employment

Logic: My mom just left, and my dad got poisoned
I was young but I was told that the government did it

Lowkey: From my heart I can say that I love being British
I grew with 5 older, brothers and sisters

Logic: Yeah I had a lot of siblings but some have gone missing
Now it's just me and my little sis

Lowkey: Britain's got a lot of immigrants; they take our jobs everyday I swear I'm sick of it

Logic: My Uncles trying to get to Britain quick

Lowkey: every 2 weeks I'm signing on

Logic: we only had school a little bit

Lowkey: I got kicked out of school very early, labelled as an idiot

Logic: Before my uncle left us, he gave me his gun

Lowkey: my girl just gave me a son

Logic: You see its hot where I live, everyday I bake in the sun

Lowkey: Its cold where I live so I read every page of the sun
And I'm getting mad, with what I look at and read

Logic: I just met a couple elders that are good on their deen

Lowkey: My dad told me joining army would be good for the P's

Logic: I started meeting, now I'm training with the mujahedeen
Because I've heard that the westerners are coming with bombs

Lowkey: I spent months in the regiment training up to be shot

Logic: But this is my land, my country, ill defend it till I pass

Lowkey: I just got the message, that they're sending me to Iraq

[Chorus]
Our pain is the same fam, its all relative
They cried the same tears, you cried for your relatives
And one way or another, my brother were all relatives
Home is where the heart is, yeah that's where it is (2X) Lowkey: Now I'm in the south of Iraq, it's a smelly place
I don't know who to trust, everybody's got a hairy face

Logic: And Basra's a scary place, its worse than it used to be
They're dropping bombs everyday

Lowkey: Even little boys are shooting me

Logic: I shoot at white faces, and any green suit I see

Lowkey: Every regiments lost a couple of troops; we've lost 2 or 3

Logic: I still go to pray in the same place the mosque used to be

Lowkey: I see little kids starving to death, with no food to eat,
But an orders an order, we've got to clean the city up

Logic: they see how we're suffering, and still they don't pity us
They shoot us every day, tomorrows probably me

Lowkey: We're trying to help these bastards, but its like they don't want to be free

Logic: Yeah these people don't know what freedom is

Lowkey: I saw my colleague rape a woman against her will, but I didn't agree with it

Logic: I shot a soldier in the face, and then I had to run quick

Lowkey: My sergeant got shot in his face by some dumb young kid,
Now I just want to go home that's where my heart is

Logic: My heart is in Basra, and never will I part it

Lowkey: this wars going nowhere, tell me why did we start it?

Logic: I'm fighting regardless till I'm resting where Allah is

Lowkey: come to think of it, I should have never joined the army
And when I think about it, I don't hate these Iraqi's

Logic: Yeah bullets flying past me, I'm scared but I can't run,
I take my sister upstairs and get my uncles old gun

Lowkey: Don't know if its terrorists or just some civilians,
but I've been told to neutralize the threat up in that building

Logic: I see the soldiers they're about to pass, I take my pistol out and blast

Lowkey: A bullet whizzes by my face and tears my friends mouth apart,
I saw red, and starting shooting to make 'em all dead

Logic: I tried to guard my sister, but a bullet hit her forehead

Lowkey: I ran up the steps to see if I buried them all
But all I saw was my little sister dead on the floor

Our pain is the same fam, its all relative
They cried the same tears, you cried for your relatives
And one way or another, my brother were all relatives
Home is where the heart is, yeah that's where it is 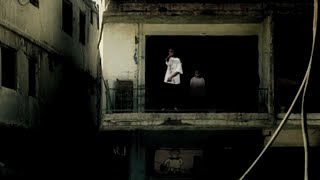 check amazon for Relatives mp3 download
these lyrics are submitted by BURKUL3
browse other artists under L:L2L3L4L5L6L7L8
Record Label(s): 2011 SO Empire
Official lyrics by