[Verse 1: Lowkey]
I believe in equality, freedom and honesty.
I believe that I'm a born leader so follow me.
This tune can touch you deep, what can it do for love and peace?
Forget the color of your skin, we're all just humans underneath.
But, we were conditioned to be ashamed of intelligence.
Take pride in your brain, it's your chain that's irrelevant.
These monsters on the mic chatting nonsense in their rhymes.
Forget your wallet and your ride, what's the contents of your mind?
You better listen when I tell the television tricks you well.
Don't let them dictate to you the definition of yourself.
'Cause when it's said and done the products are all irrelevant.
And a man who stands for nothing will fall for anything.
The choice to keep you dumb, but don't mentally succumb.
Take steps to reach your son, 'till your legacy is done.
We are set to see a better dream, eventually will come.
The equality of all and the supremacy of none!

[Verse 2: Akala]
Yo, yo, yo, yo.
I believe in truth, no matter who is speaking it.
And of course I believe in justice, no matter who's receiving it.
Believing almost nothing, I am told is the status quo.
'Cause history shows how the lies un-fold.
I believe we can use the term conspiracy theory.
To discredit inconvenient ideas without the slightest query.
Not that they're necessarily correct but the world we have created is one that's blatantly tamed to regurgitate hatred. The ones at the top think we're pawns here for their controlling.
It's about maintaining the privilege that they've already stolen.
But, we, the people can feel our consciousness is changing.
So, no matter how they brutalize they cannot restrain it.
I believe every child's a born genius, they're just taught how now to be and place barriers between us.
I don't believe in human nature, just conditioned behavior
I don't believe your oppressor, 'cause the devil would never be your savior.

[Verse 3: Black the Ripper]
Sampson, Sampson, yeah.
I believe in making money and investing.
I believe in God but religion, that's a next thing.
Terrorism and recession was made to force us into submission, now look every bodies' stressin'.
It's a deadly weapon, gotta' stay two steps ahead of 'em.
I'm like Nat Turner, with two straps I'm deading them.
I was born and raised in Edmonton, but the struggle's universal.
So in the hood trust is minimal 'cause anyone can hurt you.
I believe in my talent so I use it. Prayin' one day real music will move units.
We do this but we ain't appealing to little school kids that's why labels think we're intimidating, that's bullshit!
I prefer the word educated, yes I'm rated but sometimes I feel underestimated.
I'm only 23 rebelling in this crazy city. I can't do this by myself I need you lot to change it with me.
I believe!

[Outro: Lowkey]
So there you have it.
If you're sick of these DJ's playing the same 20 songs over and over again, text them, email them. Tell them to start playing the realness.
Peace and love. 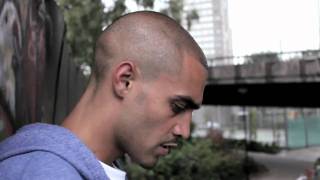 check amazon for I Still Believe mp3 download
these lyrics are submitted by kaan
browse other artists under L:L2L3L4L5L6L7L8