Live On The Air Lyrics

Live On The Air Lyrics


Ayo, I'm living abroad like the baddest bitch you've
ever seen
Ain't about that hybrid shit but I'm all about the
green
Making so many moves I need a dose of Dramamine
For rap I'm a fiend, come and test my team
I school MC's cause I'm the motherf*cking dean
My cerebral cortex force, my trigger finger reflex
To bust techs like raw sex, ain't no tellin' what's
next
I sling mixtapes like crack rocks
Watch snow bunnies chillin' in the backdrop, discussin'
how the track rocks
Goddamn, I'm a miraculous man
And if I wasn't Logic, I'd be his number one fan
Beware I'm spittin' fire cause the world is in dire
need of an MC to admire
And set the bar higher
So I conspire, within my mind just had a friar
The rap Messiah, fresh to death so peep the attire
Feelin' like B Rabbit when he slaughtered the Lotto
Get money, f*ck bitches, and respect women is the motto
You say potato, I say potato
You call 'em rappers but all I see is comedians
My future's lookin' XXL, they shit is medium
Call me Bobby Kennedy the way I f*ck with Marilyn
MCs approach, take notes, and then I bury them I'm out of this world, my studio's the planetarium
The way I flow, this shit is slicker than butter
The second I utter lyricism that leave all the rest in
the gutter
I thought I told ya'll I'm the best, d-d-did I stutter?
I'll hit your mom in the head with a car bomb just to
blow her mind like Vietnam
Had a myspace account but my only friend was Tom
When I eat p*ssy I pretend that I'm speaking in Islam
Psych, It's a joke I swear that I'm not racist
To be honest I'll murder you no matter what color your
face is
Punch you in the face if I catch you slippin' in braces
You want beef? I'll choke you to death with your own
shoelaces
Psych, I swear I'm not a violent guy
Once upon time I brought a Super Soaker to a drive-by
Full of Kool-Aid and warm piss
My buzz is growing every day and when the swarm hits
Million dollar trips, sex at the Ritz
So rich I'll make bitches show Charlie Murphy their
tits
Blow the competition to bits, leavin' the enemy lit
But I'm out cause there's women to please and money to
get
It's Logic 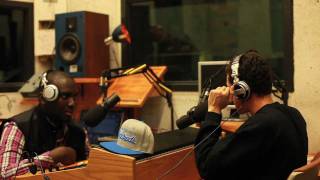