Yeah; pass the mic before I jack it like gore-tex
Bust like raw sex, rappers suck like vortex
The life of a Don- We living like kings, and killing
our pawns
Boy, the seconds it's on – don't know where we going
I'm flowing and killing this shit from dusk til dawn
Just had sex with a Middle Eastern girl- The p*ssy was
bomb
That last line made no sense like these rappers'
careers
But I make dollars, cause I'm all about the fiscal year
Yeah; you don't like me? I'll conjure up and summon all
your fears
You wanna fight me? I'll woop my own ass before you get
here
Wanna write me? And tell me that my rhymes suck?
Bitch I don't give a f*ck, I'll stab you in the gut,
call it a tummy tuck
You can ask my ex, I bust quicker than two techs
Caressed by a kid with category 5 tourettes
In other words I squeeze with ease, dot my I's and
cross my T's
I'm a perfectionist; the lesson is f*ck everyone
assessing this
It's hip-hop, not to be taken literally
However on the light of note I stayed with bills like
Hilary
My flow convects, murder subjects with little respect
Best protect your neck, before you play my tape better
inspect the deck
f*ck every other rapper forever ever forever since the
dawn of time
Sike- I'm not that much of a dick when I rhyme
On another level like duplex, bust heads like suplex
Slaughter MC's then ask who's next...

[C Dot Castro:]
Ey yo my crew next, but you say you next, so I guess we
now
Priceless flow so even If I write it's still a
freestyle
Never busting gats I ain't no gangster put that heat
down
Then go and grab a mic and see if you can f*ck with me
now
I got that A plus flow I'm on a roll bitch I can't fail
Making money with my mind, call that shit a brain sell
Raise hell, like I'm Satan's daddy while you in here
Catch me in a tenant caddy with a bitch from Cincinnati
With the thickest fatty while I hit the gas, you lick it gladly
With the window down see other bitches blowing kisses
at me
It's a fact that me and Logic rip with vicious rap to
list a wrap
We spittin' crack to keep the fiends, coming back to
show world
Reppin Maryland but I make music for the whole world
Seduce a chick with lyrics whenever she hear it, it
make her toes curl
So sick I hope I don't hurl, if you love me let me go
girl
Cause no p*ssy come before my flow, just had to let you
know girl
Spit it so thorough and in depth, I bet I leave in you
impressed
Rattpack be my family, I f*ck with y'all no incest
Only interest is to blow up, and watch they hands go up
Cause I used to throw shows back then but no one would
show up
I ain't all about the money but I want it homie sho'
nuff
Cause krispie crazy bout' the cream, you could say I'm
doughnuts

[Logic:]
I murdered my manager Chris last night
We exchanged a couple words, he said some things I
didn't like
I said okay... then punched him in the face with a
butcher knife
I want more like Ashton Kutcher's wife
Now can you feel it? They won't {Sinatra}
Gimme what I want, so f*ck it I'm a steal it
I'll dilapidate you, grab the butter knife and
decapitate you
Yeah that's what I said – huh, and bitch I did it
We all have thoughts like this; I'm just willing to
admit it
I would never act upon these thoughts now, don't you
get it?
It's like when a gentleman sees the baddest bitch and
thinks, "I'd hit it!"
But he never says it; I'll dump your body in a dessert
It's the wrath of a psychopath clutching a razor blade
in a bath
Having his last laugh, anticipating a gash- the other
night I murdered captain crunch
Right in front of Toucan Sam and a whole damn bunch
That's life, what can I say? I'm a cereal killer,
venereal dealer
And yes you know they ain't none other iller
It's Logic. 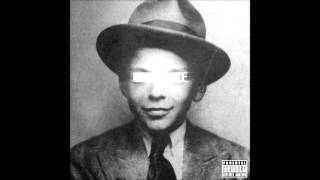