[Verse]
Trappin' at my homie house, watchin' his mama Cripwalk
Fantastic Four, it ain't a thing to make bricks talk
Run when that Jack Daniels cap twist-off
'Cause f*ckin' with that J.D., I put you in a Kris Kross
f*ck a list, I'm a Sith Lord
The West without Crook is like the G Thang beat without the synth chord
Like Eazy-E without a '64, I know you feel me if you're in poverty, piss poor
Rob you for your Snow White, where is she at?
Rob you for your bread too, where that Sara Lee at?
Different kinda coke brothers financin' my campaign
Niggas pullin' out more polls than a Quinnipiac
Want it? You could get some
Hear them hollow tips come
Hundred round mag, that's the Diggy Doc kickdrum
Line you with a thot, givin' you top
You'll get robbed by a bitch who been cocked more times than John Wick's gun
Grimey ass Eastsider
Got some Armenians that'll leave you in a meat grinder
You'll be lookin' like lasagna when police find you Buried in a hole deep enough to reach China
Shootouts feelin' them hollows burnin' you
You and your dawgs crawlin' over furniture
The burner so heavy, if Terry Crews tried to draw it, it cause a hernia
My neighbors in Suburbia learnin' that I'm a murderer
I wake up wide-eyed and bushy-tailed
And start killin' rappers who only platinum 'cause p*ssy sells
Old heads still shootin', nigga, Bonzi Wells
I could tell you how a dead body smells
Nah, that ain't the best thing
I learned the lessons that death bring
Keep bouncin' like bedsprings during a sex scene
Drivin', bustin' nuts in my sleep, my nigga, wet dreams
You couldn't hang with these bars if you was Epstein
How'd I make it out the streets? Shit
The song I made with Akon explains it all, dream big
Now I'm throwin' skyhooks over Christopher Wallace beats, Kareem Biggs
Rock with me, nigga, the king lives
As long as you live and breathe

[Outro]
Come here, nigga
Yeah, nigga
You made that list, nigga?
Nahahhhhh
Oh, it's hard to talk with a gun in your mouth, huh?
You the one that made that motherf*ckin' list?
Oh, you can't talk, you sound like one of them mumble rappers now, huh?
Top 50, greatest of all time
You made that f*ckin' list, nigga?
I told you 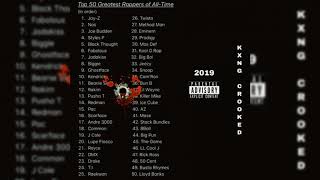